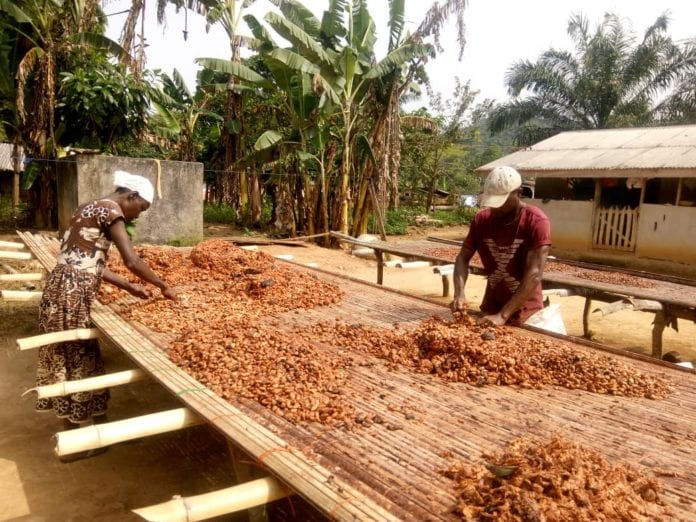 Madam Afua Serwaah Akoto, a cocoa farmer and entrepreneur, recently missed an opportunity to buy palm fruits she processes into palm oil to sell due to the late maturity of her cocoa for sale. She was, therefore,  strapped for cash, as proceeds from cocoa beans are seasonal.

Madam Akoto,  a mother of three, is not alone in this quagmire.  Many cocoa farmers are already experiencing reduced harvests because of the impact of climate change in the form of erratic rainfall and long dry seasons.

One option for  the farmers during these periods of low or no yield is to actively engage in alternative income-generating businesses to support their families. There is however, one hurdle preventing them from engaging in these income supplementing activities – the lack of credit.

Securing loans from financial institutions should have been the obvious option for Madam Akoto and farmers like her, but too often their low economic profiles and the exorbitant interest rates became barriers to financing. They are also discouraged by the fact that those who even qualify often default in payment, leading to confiscation of assets.

It is, therefore, not surprising that when the Integrated Village Savings and Loans Associations (VSLA) was introduced, it spread like wildfire in Madam Akoto’s community;  Adansi Anwona, and adjoining areas  at Adansi  North in the Ashanti Region.

Since the formation of the Association in 2019, it  has raised over GHC500,000 ( USD 68,129) from the weekly contribution of  members  – almost all cocoa farmers and traders who are the breadwinners in their families.

Every Wednesday, the women meet at a designated venue and pay their contributions of not less than GHC10.00 (1.36 dollars).

Per the agreed rules governing the groups, no member has to pay more than GHC50.00 (6.82 dollars), representing five shares. All members make a social fund contribution of GHC1.00 (0.14 cents), which is used to support members in times of distress.

They are allowed to apply for loans, which may be used to fund their children’s education, pay hospital bills, buy agro inputs, perform funeral rites, and  engage in alternative businesses.

For Madam Akoto and other members, especially the women, access to credit is no longer a limitation to their businesses. The VSLA members can borrow up to GHC10,000 (USD 1,362) at an interest rate of eight per cent, which is about six per cent lower  than the rate of most financial institutions.

Literature from the Sixth Assessment Report of the Intergovernmental Panel on Climate Change and farmers’ experience indicate that increasing temperature and rainfall variability are key challenges that cocoa farmers are  experiencing. The VSLA could be one of the interventions to reduce the impact of climate change among farmers so that when the rains do not come, instead of suffering through a crop failure, members can borrow money from the Association to trade.

Funded by Nestlé, the VSLA initiative seeks to build the economic and social capacities of cocoa farmers as well as contribute to poverty reduction. It is jointly implemented by the Participatory Development Associates (PDA), Cocoanect and Cocoa Merchants Limited.

Mr Kweku Okyere, a VSLA Champion in the Adansi Anwona Community, says the Association began with just two groups but has now surged to 14, due to acceptance and benefits to cocoa farmers and their households.

One other benefit is that the mobilisation of the groups has given the purchasing officers the peace of mind to engage in their business because they no longer had to wake up to a knock on  their doors by cocoa farmers seeking loans, he said.

“Top on our loan lists are the funeral and business loans. It gave us a lot of money and we hope to continue this year,” he said.

This year, he hints that the social fund would be used to purchase chairs and mattresses to be hired out to people during festive occasions, as another stream of growing revenue.

Mr David Eshun, Senior Project Officer of the PDA, explains that two groups were initially formed and two people selected and trained to coordinate the formation of VSLA groups in other communities.

“It is a sign of fulfilment that the two have worked hard to add 12 more. This has been possible because the communities were actively involved from the beginning and they owned it,” he said.

“Our assessment shows that levels of poverty and borrowing at high interest rates from financial institutions have reduced”.

The VSLA initiative also integrated a Gender, Action and Learning System (GALS) to ensure that besides encouraging members to save, they were equipped with household resource management and effective planning skills. About 19 of the groups integrate GALS training, which   has impacted 224 women.

So far, the VSLA and GALS have proven to be efficient methodologies to support household financial capacity building, development of household business/action plans, and gender empowerment.

The methodology has built the confidence and positioned women to take important decisions in their lives. Thus,  Madam Akoto and many other women Cocoa farmers,  who are members, are optimistic that come any eventuality, they have a shoulder to lean on.

The VSLA, they say, has offered them limitless lifetime opportunities to ‘beat’ poverty, the first goal of the Sustainable Development Goals.