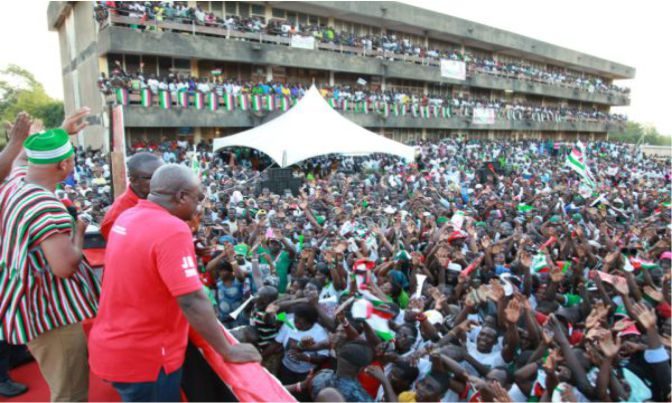 His Excellency, President John Dramani Mahama began a tour to the various regions to account to the people of Ghana on how his government has performed in terms of fulfilling previous campaign promises.

Efforts by civil society organisations in Ghana to secure the passage of the Right to Information Bill have proved abortive for more than a decade. The RTI Bill is the only Bill in Parliament that has suffered from several failed promises by politicians from both sides of the political divide. Governments both past and present have made promises to put the legislation in place but have failed to do so despite their proclaimed commitment to the fight against corruption.

It would be recalled that the NDC party in their manifesto in 2008 and 2012 promised Ghanaians that when they get into power, they will pass the RTI law. Specifically in 2008, ‘the NDC promised to deepen political accountability and transparency, enhance the disclosure of budgets, public expenditure and procedures, enact the Freedom of Information Act’. In 2011, the Government signed unto the Open Government Partnership (OGP) Initiative and made commitments in both the first and second action plans to lobby/engage Parliament to pass the RTI Bill by the end of 2013 but four years on, this commitment remains an empty one..

In the NDC’s 2012 manifesto, His Excellency President John Dramani Mahama promised Ghanaians that the ‘next NDC Administration will implement the Freedom of Information Act once it is passed by Parliament and will work with the Legislature to prioritise the passage of the Freedom of Information Act …’. His Excellency, President Mahama, has indicated on many occasions that when the Bill gets to his table he would sign it into law without delay and that if the Bill is passed, his government would be reckoned as having passed the oldest Bill in Parliament. Most importantly and indeed more worrying is the outright proclamation made by government through the Deputy Attorney General, Dr. Dominic Ayine at the 117th Session of the UN Human Rights Committee in Geneva in June this year that the RTI Bill will be passed by July 22nd 2016. Interestingly the Bill has not been discussed even once since his return from Geneva. Yet another failed promise.

The Coalition would like to draw the attention of the public to the fact that as at today 28th July 2016, Parliament has only considered 29 clauses out of 157 clauses of the amendments proposed. The Bill was last considered on June 23rd and till date it is not clear why Parliament has decided not to proceed with the consideration process. There is nothing to show that the Executive is lobbying or working with Parliament to ensure that the Bill is passed before the elections. In fact we have heard some Parliamentarians say that the RTI Bill is an orphan because nobody from the executive is lobbying for its passage.

This provides grounds for the public to wonder whether Parliament and the powers that be are afraid of the light that a robust RTI law will throw on all aspects of public life and ensure that those in whom the public trust is reposed carry out their function in a climate of transparency and are accountable to the sovereign people of Ghana. As a Coalition we are concerned that a law such as the RTI law that will empower citizens to demand accountability from their leaders has seen more promises than action. We are aware that Parliament has passed Bills under certificate of urgency because the Executive has an interest in those Bills but the passage of the RTI Bill has delayed for this long because it gives power to the people, has the ability to expose corruption and curtail waste of public resources. So far, we have not heard the President requesting Parliament to, as a matter of urgency, pass the ‘Peoples Bill’ inclusive of the amendments into law neither have we heard him cautioning Parliament for delaying the consideration and passage of the Bill with the amendments.

We hope that this silence on the part of both the Executive and the Legislature is not a strategy to rush passage of the Bill into law without the necessary amendments. The Coalition would like to reiterate that, while we demand the passage of the RTI Bill, we do not need any kind of RTI Law; what Ghanaians need is an effective law that will help in promoting transparency, accountability and democratic participation. Anything short of that isUNACCEPTABLE.

We would also like our Parliamentarians to tell us whose interest they are actually serving. When loans are brought to Parliament, we see Parliamentarians turn out en-mass to endorse those loans so that government can borrow more money and put the country in more debt however, the law that will give them the right information to enable them as well as the citizenry effectively scrutinize these loans and ensure that they are properly utilized has the support of only a handful of MPs. What excuse will our MPs give for not passing the RTI Bill in this sitting? Some MPs have told us that they have received petitions from their constituents regarding the delay in the passage of the Bill, the question then is: as the MPs return to their constituencies, how will they account to the people for their failure to pass the RTI Bill as promised? Are they not taking the electorates and their constituents for granted? Even the Speaker of Parliament, Rt. Hon. Edward Doe Adjaho who promised the public that the RTI Bill will be prioritized in this sitting appears to have lost interest in the Bill, WHY?

As we progress towards the elections, we would like to call on the Executive to engage Parliament to, as a matter of urgency, pass the Right to Information Bill with the amendments before the 6th Parliament lapses in January 2017. GHANAIANS DO NOT WANT THE RTI BILL TO BE ANOTHER CAMPAIGN PROMISE. WHAT WE CAN PROMISE GOVERNMENT AND MEMBERS OF PARLIAMENT IS THAT THERE IS A PRICE TO BE PAID FOR THEIR REFUSAL TO PASS THE RTI BILL WITH THE NECESSARY AMENDMENTS INTO LAW THIS YEAR.

ISSUED BY THE COALITION ON THE RIGHT TO INFORMATION (RTI), GHANA, JULY 2016

Accra Floods: How People Were Running For Their Lives