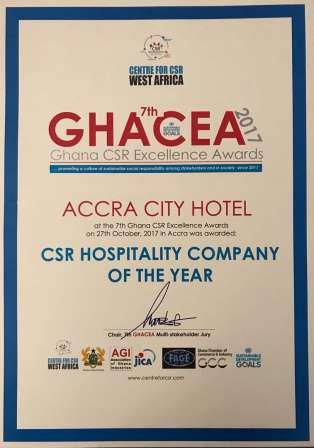 Accra City Hotel has been adjudged the Corporate Social Responsibility (CSR) Hospitality Company of the Year in Ghana. The Hotel received the award at the seventh Ghana CSR Excellence Awards, held in Accra.

The premier four-star hotel won the prestigious award for distinguishing itself in the hospitality industry through its strategic CSR initiatives that have brought value to its stakeholders.

This year, the Hotel embarked on a number of significant CSR activities including the promotion of fine arts, tourism and culture through its various initiatives including painting competitions, arts exhibitions and lessons as well as high-profile art workshops.

Accra City Hotel also embarked on a breast cancer sensitisation and screening programme for hundreds of women in Accra.
Other corporate benevolence done by the Hotel included a donation to the Children’s Hospital as well as a corporate sponsor of some
projects for the Ghana 60 Years on celebration.

Speaking on the award, the Executive Director of the Hotel, Emmanuel Adu-Sarkodee, said the honour is a testimony that its stakeholders recognise the benefits of the Hotel’s CSR initiatives.

“As a brand, we always endeavour to serve society in various, relevant ways. We don’t embark on CSR for its name sake. We rollout on programmes that contribute to the betterment of our stakeholders. This award is an encouragement to continue to distinguish
ourselves in this area.”

The General Manager of Accra City Hotel, Roman Krabel, stated that CSR was a key priority for the Hotel, and it will continue to engage in programmes and projects that will serve the benefit of its market.

“At Accra City Hotel, CSR is ingrained in our philosophy. We believe that hospitality is not sustainable over the long term without the development and investment in local communities.”

He dedicated the award to the clients and patrons of the Hotel.

Prior to attaining this feat, the Hotel had won the Best Hotel HR Management in Hospitality at the 2017 Human Resource (HR) Focus
Awards and adjudged the Best City Hotel in Ghana at the 2017 Africa Tourism Awards hosted by the World Tourism Forum in Accra.
GNA/Newsghana.com.gh