The  Accra High  Court has thrown out a suit seeking to place a perpetual injunction on the construction of Empire Cement Ghana Limited under the One District One Factory (1D1F) project.

The McCarthy Hill Residents Association in August 2021, went to court to place the injunction on all construction activities by the Empire Cement factory with allegations that they will be affected by air pollution if the factory is allowed to be constructed.

The court presided over by Justice Joseph Adu Owusu Agyemang struck out the injunction application after the plaintiffs filed a notice of discontinuance when it became obvious that they have no case in law against the construction of the factory.

The court went ahead to ask the residents association to pay an amount of Gh5,000 to the company for wasting the time of the court and the Directors of the company.

Lawyers for the company after the ruling of the court said due to the injunction application, the company had no option than to confine themselves to due process but were delighted by the ruling.

According to Empire, the Plaintiffs have done extreme damage to the company and they are seeking advice from their lawyer for the appropriate action to take against the Plaintiffs.

The court on Tuesday, September 7, 2021, ordered all operations in connection with the construction to halt until a determination is made.

An application to join the suit in support of Empire Cement before the determination of the court filed by a group from Tetegu, a community around the McCarthy Hill area was later withdrawn by them, due to what they described as certain anomalies in their application to join.

The McCarthy Hill Residents Association earlier this year raised a red flag when they had a wind of the construction of the factory.

The alleged implications on the environment and the health of the people living in and around the catchment area was a concern to them if construction was permitted go on.

The Assembly Members within the Weija-Gbawe Municipal Assembly (WGMA) also on the 13th October 2021, held a press conference to kick against the closure of the Empire Cement Ghana Limited.

According to the assembly members, the factory which was about 85 percent complete fell under the government’s flagship programme, “One District, One Factory (1D1F)” policy, and do not understand why it was closed down by the Environmental protection Agency (EPA).

They called on the government to investigate the Environmental Protection Agency (EPA) which halted construction works at the cement factory, describing their treatment towards the company as unfair.
The factory is envisaged to create about 13,000 direct and indirect jobs for the youth in the area when operationalised.

One of the Assembly Members, Mr Andrew Oppong, who spoke on behalf of his colleagues at a press conference accused the Pambros Salt Industries Limited of “being behind” the actions of the EPA to close down the factory and asked that the government immediately intervene in the matter.

The Assemblymember said operators of the Cement Factory had assured the Assembly and all stakeholders within the municipality that, it had the needed production technology and had committed to a Gh₵60,000 bond over a three-year period to be paid to the neighbouring company should it default in its operations.

These include the use of cyclone technology and proper construction methodology to ensure an air and water-tight production environment.

The company has also gone ahead to propose the establishment of an Environmental Fund where monies would be lodged, should they breach any environmental process.

Mr Oppong expressed the need to protect investors and not to sabotage “an investment that would help reduce the unemployment rate within the catchment area. 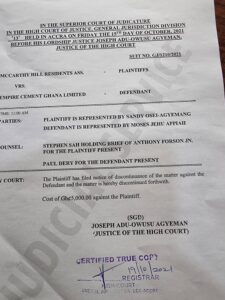