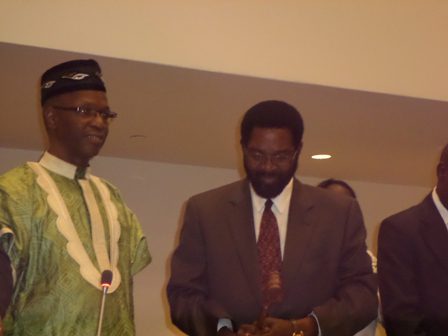 The mayor of Accra, Dr. Alfred Oko Vanderpuije has been presented with the gavel of the president of mayors. This makes him the first president of the World Alliance of Mayors and leaders of Africa and of African descent.

He was elected during the Second Meeting of the Global Alliance, held from 19th to 21stSeptember 2014, at the
United Nations Headquarters in New York.

In a letter written to President John Mahama by the Deputy Executive Director of Global Alliance, Djibril Diallo, he spelled out what informed the group?s decision to make Dr. Vanderpuije president.

The letter to the president states that ?the Honorable Lord Mayor, Dr. Alfred Vanderpuije has been a strong and constant advocate for the values and vision of the Global Alliance, which serves to focus the efforts of leaders at all levels of government and in intergovernmental organizations towards improving the situation of Africans and people of African descent?.

It also states that ?since the formation of the Global alliance by consensus of delegates to the Third World Summit of Mayors and Leaders from Africa and of African Descent held in September 2014 in the Republic of Colombia, Dr. Vanderpuije?s knowledge and experience as Chief Executive of Accra, will be a strong asset to the Global Alliance, and are therefore certain that it will thrive under his leadership?.

The fourth World Summit of Mayors will be held from the Summit, under the theme of Economic Empowerment and Sustainable Human Development in Africa and the Diaspora.

It is intended to create closer links between Africa and the African Diaspora in the United States, Europe, Latin America and the Caribbean.

The Summit is being co-organized by the Global Alliance, the African Renaissance and Diaspora Network, and the Joint United Nations Programme on HIV/AIDS.