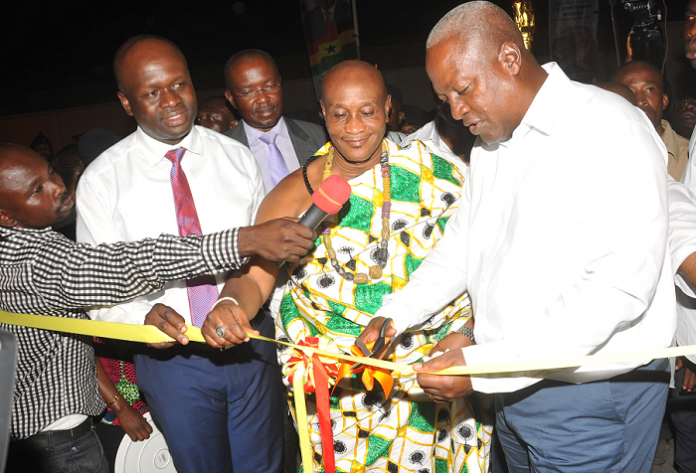 President John Mahama has opened the Accra Digital Centre with the promise of generating some 10,000 jobs at full capacity for the country’s youth.

The Centre, will provide data for both private and public institutions across the country.

The centre will among other things facilitate the consolidation and aggregation of all the Government’s key ICT infrastructure in secure, highly available and resilient facilities.

The president said the launch of the project highlights the giant strides made in the ICT sector and the huge prospects to providing jobs for the youth in the ICT enabled sector.

“This is what I mean when I say we are changing lives and transforming Ghana,” he said to a rapturous applause and smiling faces of ministers, government appointees and some members of the general public.

The president said the starting point of creating jobs is to create a stable economic environment, something his government has been able to do in the 2016 financial year.

President Mahama added that the resolution of the power sector challenges has also created a congenial environment for companies to plan well which has impacted positively on the country’s currency.

He said Ghana’s cedi is now one of the best performing currencies in West Africa.

“Stabilising the economy of the country will see accelerated growth of some 8 per cent next year,” he promised, adding, last week Ghana was adjudged the best place to do business in West Africa better than Nigeria, Cote D’Ivoire.

“Ghana is rising,” he stated, assuring unemployed youth not to despair but remain confident that he will remain the champion of job creation in the country in the coming year.

He said some 69 companies have so far registered and set up in the free zones with the prospects of creating employment for the teeming unemployed youth.

The president took the opportunity to launch “digital jobs for digital youth,” a vehicle he said will create more jobs for youth in the ICT sector.