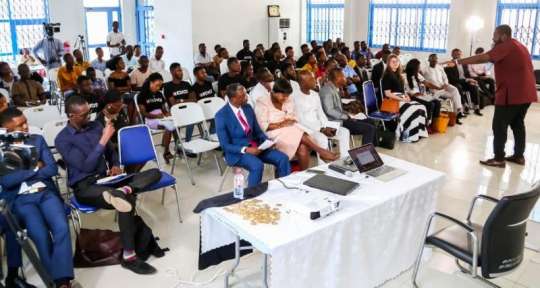 Accra Technical University (ATU)in collaboration with the Hague University of Applied Sciences (THUAS) have held a seminar to promote the usage of blockchain technology.

Blockchain is a technology of principled digital database of economic transactions with the tendency to be programmed towards recording virtually everything of value, with the aim to enhance database management.

The seminar themed: ”The Power of Disruptive Technology” brought together experts in blockchain and multinational companies to leverage on the benefits of blockchain in terms of transparency, traceability, security, cost minimisation and data immutability.

Professor Theo Bosman, the Chief Internationalisation Officer from THUAS, speaking at the Blockchain Kick-off event held in ATU campus, said the aim of the seminar was to sensitise the public, business, government and key stakeholders on the immense benefits of applications of blockchain.

He said that introducing this course would be a big step in placing Ghana as a lead country in blockchain technology considering the dynamism of the business environment and would make life easier in areas including; transportation, banking, education, communication among others.

“Basically, the partnership is about the latest technology about blockchain. Blockchain really will change the world. It is a way of financing and controlling money that is coming in and out and a way of achieving integrity and also verifying, where the money goes.

It’s important that, the students would learn this technologies to make Ghana a leading country in blockchain technology,” he said.

He added that, the strategic partnership between the two institutions, would see lecturers from THUAS travel to Ghana to engage more with students and general public to better under the blockchain technology.

Professor Edmund Ameko, Acting Pro-Vice Chancellor in his remarks about the seminar said, they were introducing such technology courses to help prepare students for the job markets thus moving away from teaching students old things.
The move, he believed would make graduates from the school be competitive in the job markets considering the changes in the technological world.