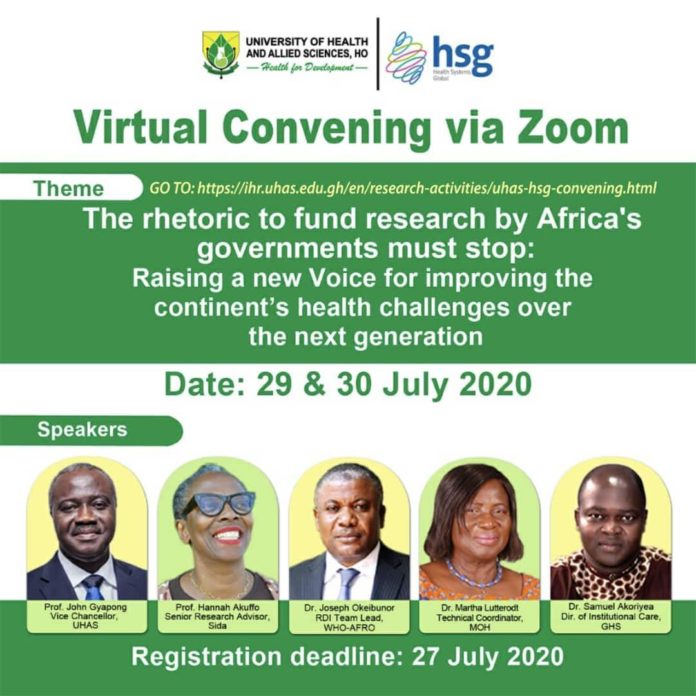 Actors at a conclusion of a virtual convening has extolled government for taking the bold steps to draft the Ghana National Research Fund Bill of 2019, currently under consideration in Parliament.

When considered, it would ensure that at least one percent of its gross national product (GDP) for research and development (R&D) would be set aside for that purpose.

In a communique’ signed by Mrs Maria Gwira, Director of Public Affairs, University of Health and Allied Sciences (UHAS) after a two-day virtual event called for engagement with all actors including; research and academic institutions in all processes leading to the passage and implementation of this Bill.

The dialogue was on the theme, “The rhetoric to fund research by Africa’s Governments must stop: Raising a new voice for improving the continent’s health challenges over the next generation,” which was organised by UHAS, Ho, with support from Health Systems Global (HSG) with participation of other institutions and individuals.

It insisted government features research prominently as a key driver of the next 2020-2025 and subsequent development plans.

The statement called for engagement with all stakeholders, including; research and academic institutions, in all processes leading to the passage and implementation of this Bill.

It urged the government not to shy away from learning from the successes of other African countries that made substantial investments in R&D and emulate models that have worked.

It called for action to feature research prominently on the front-burner as a key component for the next (2020–2025) and subsequent development plans.

The statement demanded accountability from stakeholders in academia and research institutions.

The communique’ insisted the government be answerable for its commitments and promises to fund R&D by developing a tracking system with timelines to create a sustainable framework to support a national R&D agenda.

It demanded transparency and equity in the allocation and disbursement of resources to support R&D and partner with relevant organisations including; the media to tell the success stories that would highlight the impact of research to national development.

“We, the conveners at UHAS, resolved to broaden the scope of this public discourse in order to build synergies with other research and academic institutions that will lead to consensus in support of our position stated above.”