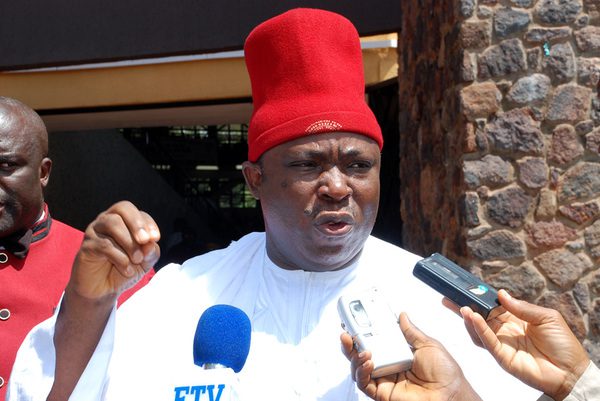 Anambra State Chapter of the Actors? Guild of Nigeria ( AGN) has adopted Chief Victor Umeh , Chief Godson Ezenagu as well as other candidates contesting on the platform of the All Progressives Grand Alliance ( APGA ) in next months general elections .

The apex body of the motion picture industry in Nigeria said that the adoption was informed by the fact that Chief Umeh and Chief Ezenagu have been very instrumental to the progress the industry has made in Anambra State and beyond and as such there was need for AGN to throw their weight behind their candidacy .

Speaking at the adoption and endorsement ceremony in Awka at the weekend , the Executive Chief Chairman of Awka-North Local Government Area Chief Cosmas Okonkwo said that the Actors?Guild of Nigeria Anambra State Chapter adopted Chief Victor Umeh as the sole candidate they would vote for in the forthcoming general elections .Chief Okonkwo further explained that the entertainers equally adopted Chief Godson Ezenagu as the sole candidate whom they would will supportt for the forthcoming house of representatives? as well as other APGA candidates involved in all the elections .

The Awka-North LG boss said that the adoption and endorsenent was informed by the outstanding performance of the APGA government in Anambra State .

Vice-President of the Actors? Guild of Nigeria South-East Zone and former State? Chairman of the guild in Anambra Barr.Ikechukwu Ezenagu said Chief Umeh was the grand patron of the guild in 2008 and that Chief Ezenagu was crowned patron of AGN in the year 2005 stressing that the duo have been very useful and instrumental to the laudable achievements recorded in the guild . He said Nollywood decided to pitch in with APGA in next months general elections following the party?s antecedents in infrastructural developments in Anambra State .

OThe vice president of the AGN was however of the opinion that should APGA candidates win in the elections , they would assist Nollywood to combat piracy , finance , film locations to mention a few of the problematic areas they would profer lasting solutions . He therefore pointed out that the position of Nollywood in the 2015 general elections was that Nollywood has officially adopted GoodLuck Jonathan as its choice for presidency? .

Representative of Chief Victor Umeh on the occasion Mr.Chuka Obele Chuka said he came with good tidings from Chief Victor Umeh stressing that Chief Umeh and all APGA candidates in next months polls would assist continue to assist the guild in all their endeavours .

Moreso Mr.Eddy King Mbachu immediate past secretary of the Anambra State Chapter of the Actors? Guild of Nigeria noted that Nollywood was aware of the antecedents of Chief Victor Umeh ,Chief Godson Ezenagu and other candidates contesting on the platform of the All Progressives Grand Alliance in the 2015 general elections .Mr.Mbachu said AGN saw it as worthwhile to lend their support through the adoption of? all APGA candidates for next months polls .