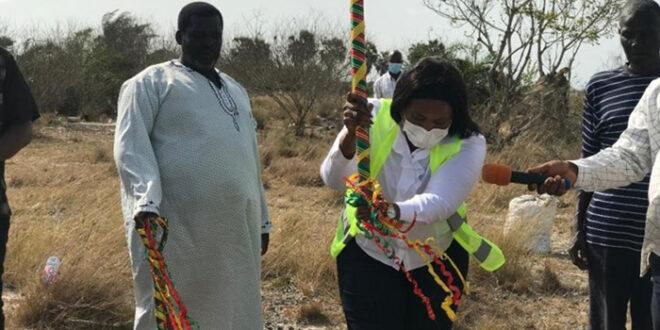 Mr. Godwin Agudey, Presiding Member for the Ada East District Assembly on behalf of the Assembly Members noted that, “we consider the endorsement as respect for the office of the President who through a well-thought-out deliberations and the hard work of the nominee decided to retain her at post, we must support through our votes”.

The Ada East District Assembly will vote on Friday, October 8th, 2021. According to the Local Government Law, MMDCE nominees must secure at least a two-thirds majority of valid ballots cast to gain the approval of the Assembly.

Mr. Agudey in an interview Ghana News Agency at Ada Foah during a meeting with the Assembly Members applauded Madam Pobee for her hard work during her first term, and pledged to vote for her to continue the good work.

According to the Ada East Presiding Member, the assembly members considered the re-nomination of Madam Pobee as a good move by President Akufo-Addo “all assembly members are ready to give her their 100 per cent votes come October 8th”.

Mr. Agudey, said the Assembly Members also resolved to respect Mr Henry Quartey, the Greater Accra Regional Minister who was doing great works to for Accra to work, “it is the resolution of the Assembly members to support the initiative through a 100 per cent for Madam Pobee”

During a meeting with some 621 Assembly Members and government appointees in the Region, he explained that the “Accra must work,” agenda would only be realized when Assembly Members worked as agents of change.

He said political affiliation should not be the reason a competent person could be denied an opportunity to serve; it was the expectations of the Regional Coordinating Council (RCC) that all the 29 MMDCEs nominees received 100 per cent endorsement.

Mr Quartey assured Assembly members of an all-inclusive leadership at the local level, adding that he was going to monitor and evaluate activities of the various MMDCEs to ensure Assembly Members got the necessary support they needed at their various electoral areas.

“Confirm for me all the President’s nominees and I will confirm for you the needs in your electoral areas,” he appealed to the Assembly members.

Mr Joseph Korto, National Dean of Presiding Members, commended the efforts by the Assembly Members and assured them that critical attention would be given to their welfare.

Mr Korto, who is the Presiding Member of Tema Metropolitan Assembly, told the Ghana News Agency in an interview on the side-lines of the engagement that when the confirmation of the nominees delayed, it would stall developmental projects in the communities and renewed his appeal to assembly members not to delay the confirmation of MMDCEs.