“In our quest to revamp commercial agriculture in the district, and to ensure all year farming, the Assembly positioned itself to be selected for small scale irrigation system, which has been constructed at Angorsikpoe,” she indicated.

She added that the irrigation system was hybrid and used both solar and electricity to cater for appropriate needs of the farmers and the expansion of the irrigation had increased its serving capacity from 50 to 150 hectares of land.

The Ada East DCE stated at the first ordinary session which was to consider the Assembly’s Authority Report for ratification and implementation that about 3,000 seedlings each of mango and coconut were ordered for distribution under the planting for Export and Rural Development (PERD) initiative.

Ms Pobee said the District had received its share of subsidized fertilizer which would be distributed to farmers to increase crop productivity and the project was under the auspices of Ghana Peri-Urban Vegetable Value Chain funded by Japan International Cooperation Agency (JICA) and the World Bank.

She called on all the farmers in the irrigation catchment in the District to take advantage of the interventions and engage in all year farming as that would help in raising incomes and lower food prices and enhance rural livelihood.

The first ordinary session of the assembly was in accordance with the provision of local Governance Act 936 of 2016, which enjoins District Assemblies to hold ordinary meetings each quarter of the year.

It was attended by Assembly members, Heads of Departments on institutions within the district, and other notable personalities.

Lack of storage facilities remain a major problem for farmers 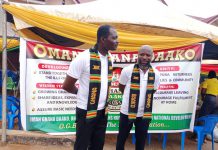