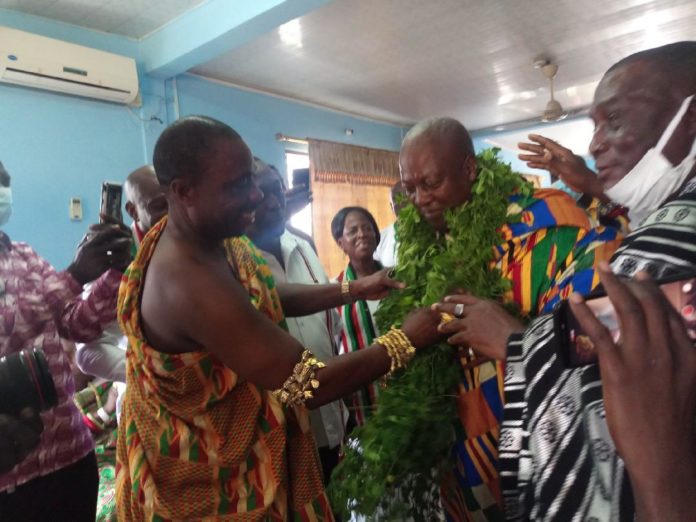 The installation took place when the former President paid a courtesy call on the Paramount Chief at his Palace in Ada, to seek his blessings at the beginning of his five-day campaign tour of the Greater Accra Region.

Nene Obichere III, Manklalo of Ada, who spoke on behalf of the Paramount Chief, hailed Mr Mahama for the “numerous development projects” he brought to the traditional area during his first term as President.

He told the former President that should he be elected on December 7, he should endeavour to continue his development projects in the area, which he said had been abandoned.

Naana Kabukuor Dumaaley, Paramount Queen-mother of Ada, lauded the former President for choosing a woman as his running mate for the December 7, general election.

She said the choice of a woman as running mate meant that the former President had women’s issues at heart and wished Mr Mahama well in the December polls.

Mr Mahama said that his next administration would continue all projects in Ada Traditional Area, which he began during his first term, but had been “abandoned” since the NDC left office.

He mentioned the Ada Sea Defence Project, the Ada roads, and a solar generating power plant on an island and said his next administration would also upgrade the Ada District Hospital to a referral hospital to cater for the health needs of the people.

The former President said the next NDC government would build a community day senior secondary school at Kasseh to ease the pressure on the Ada Senior High School.