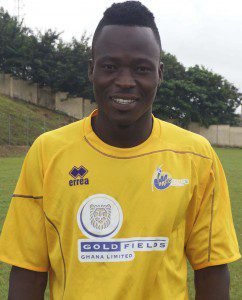 Highly rated goalkeeper Adade Foli has been linked with a surprise return to Ebusua Dwarfs after failing to hold down a starting place in Medeama.

The 24-year-old only managed just 8 games in the season under review and is desperate to get his career back on track.

With Ebusua Dwarfs returning to the Ghana Premier League and Foli being out of contract, the shot-stopper has been linked with a return to the Cape-Coast based club.