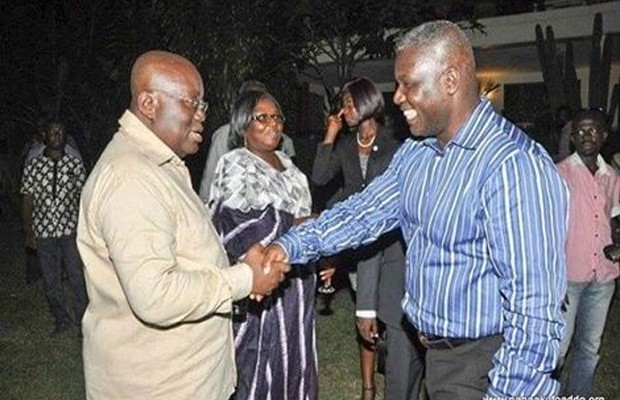 Following what appears to be intense pressure from the opposition New Patriotic Party (NPP), Neat FM talk show Host, Adakabre Frimpong Manso, has publicly denied reports quoting him as having alleged in a recent Joy FM interview that he had received death threats and abuses from opposition leader Nana Addo Dankwa Akufo-Addo.

Media reports on his Joy FM interview have provoked outrage among the rank and file of the NPP, forcing a strongly worded statement in which the party leadership challenged Mr. Frimpong Manso to back his claims with proof or render an unqualified apology to the former Foreign Affairs Minister.

They even dared him to report Nana Addo to the police since death threats constitute a criminal offense.

Earlier, the NPP, alleging bias, issued a statement in which it announced indefinite boycott of all programmes on Neat FM and its sister station Okay FM.

“Nana Addo didn’t personally send a text to Adakabre that he will kill me.

And he didn’t verbally say that he will kill me. And secondly, the intention for which I granted that interview was not to portray Nana Addo as a violent person because I don’t like him or that because he’s a bad person.

Any inconveniences this must have cause Nana Addo and the NPP I duly apologize.

A statement personally signed by me will follow,” he added. In a related development, Okay FM’s Kwame Nkrumah Etikesie, has equally rendered an unconditional apology to the opposition NPP and its leader after he was publicly accused of deliberately working against the party.

“As it is said, sometimes he who’s creating the path is unaware the path is crooked and so I have listened and reflected on what happened and people have corrected and advised me.

So after the reflection, I wish to state that I am deeply sorry and I apologize to Nana Addo and the NPP as well as all parliamentarians of the party who may have been affected by what transpired.

I ask the NPP to forgive Okay FM and also forgive me.”

Earlier, management of the two stations assured the NPP that – the company will always strive to exhibit professionalism in the performance of its operations and towards nation building, and further appealed to the opposition party to rescind its decision.