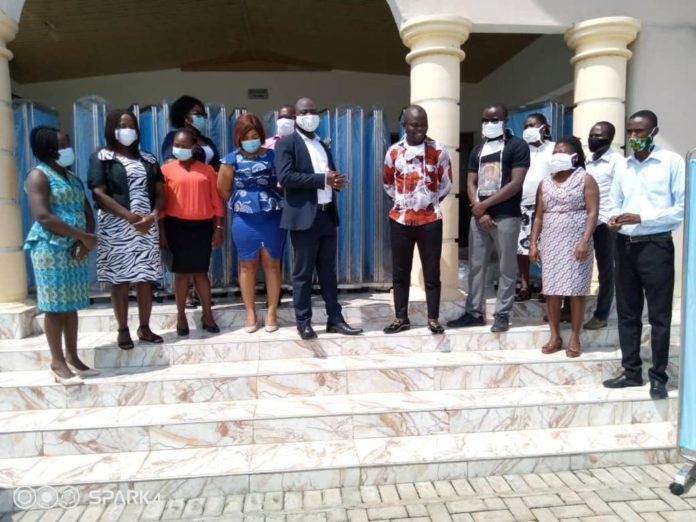 The Adaklu District Health Directorate has received 18 medical/ward screens from the District Assembly for onward distribution to five Health Centres and eleven CHPS Compounds in the District.

Mr Phanuel Donkor Kadey, the Adaklu District Chief Executive, who presented the screens to the Directorate, said it was to boost health confidence and provide quality healthcare services to the people.

The DCE said the medical screens cost GHC15,295.50 and funded from the COVID-19 allocation of the District Assembly.

He said since assuming office in 2017, the Assembly had invested in the health and sanitation sectors, with the focus of making primary healthcare available and accessible to women, children, elderly, and all vulnerable groups.

Mr Kadey said such interventions saw the supply of motorbikes, medical beds, construction of CHPS Compounds, and also some direct cash transfers and many others, to the Directorate.

The DCE praised the staff of the Directorate for the commitment and hard work, especially during the COVID-19 pandemic period.

Mr Kadey noted that in the face of lack of critical logistics, the Directorate was able to stand tall in the COVID-19 fight, especially during the period the District recorded some cases.

Dr Charles Azagba, the District Director of Health Services, who received the items, was grateful to the Assembly for supporting health delivery in the District.

He said the Directorate had only two medical screens and described the presentation as timely.

Dr Azagba said having received motorbikes in the past, Personal Protective Equipment and direct cash support during the COVID-19 pandemic, the Directorate was working hard to make Adaklu, a model of quality and improved health service delivery.