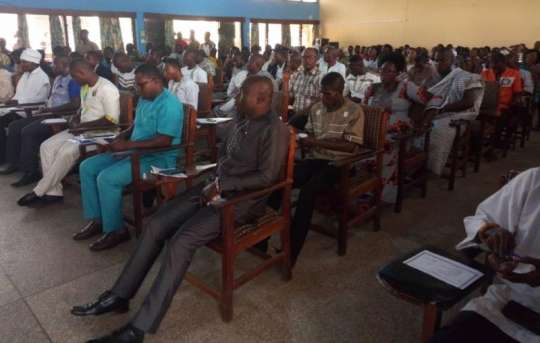 The Chiefs of Adaklu have settled a misunderstanding between them and Mr Phanuel Kadey Donkor, the District Chief Executive (DCE) for the area over an alleged misconduct of the DCE.

Togbe Gbogbi Atsa V, Paramount Chief of Adaklu Traditional Area, at the inauguration of the new Assembly at Adaklu Waya, said “the impasse between us is over and buried forever” for peace and development in the Adaklu.

The chiefs were previously boycotting activities of the Assembly and had called for the removal of the DCE.

Mr. Pius Enam Hadzide, Deputy Minister for Information in a speech to inaugurate the Assembly, thanked the chiefs for the “maturity” in handling issues that could retard the progress of the area.

He said Assemblies were a critical part of government and have vital roles to play including exploring avenues for the creation of employment for the people especially the youth and ensuring that government delivered on its promises to the people and asked members to do their best.

Mr Hadzide said unplanned and haphazard development, building on waterways and marshy areas had become a norm and a serious implication for national development and public safety and appealed to the Assembly members to engage their electorate on ending the practice.

Mr. Phanuel Kadey Donkor, appealed to members to bury their differences and work hard to free the people from poverty, hunger and disease, adding, this could only be achieved in a peaceful and united environment.

Mr. Kwame Agbodza, Member of Parliament for the area, said the creation of the Adaklu District Assembly was not a political decision, but by the toil and sweat of the traditional authorities and appealed to all citizens of Adaklu to take the development of the area as their top priority.

A total of 19 Assembly members consisting 13 elected and six government appointees were led by Mr Samuel Essel-Walker, District Magistrate for Adaklu and Agotime/Ziope to swear the official oath, oaths of secrecy and allegiance.