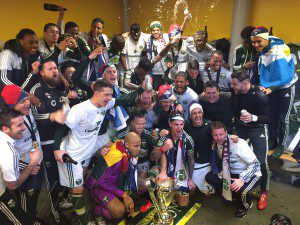 Ghana goalkeeper Adam Kwarasey is basking in the glory after guiding Portland Timbers to a historic American Major League Soccer triumph on Sunday.

The 27-year-old was instrumental for Timbers as they secured a 2-1 win over Columbus Crew to secure their first ever MLS title in the club’s history.

And the Norwegian-born-shot-stopper was left thrilled with the achievement in his debut season.

“It’s just amazing. I can’t describe it right now. It’s so fresh, the adrenaline is high and you see the energy in this room right now,” he told the club’s official website

“We just played a 90-minute game. I’m sure all of the guys are tired but they’re still able to enjoy this. Unbelievable.”

Kwarasey joined the American side after leaving Norwegian champions Strømsgodset in December 2014.

He performance has skyrocketed amid constant calls for his return to the Ghana national team.