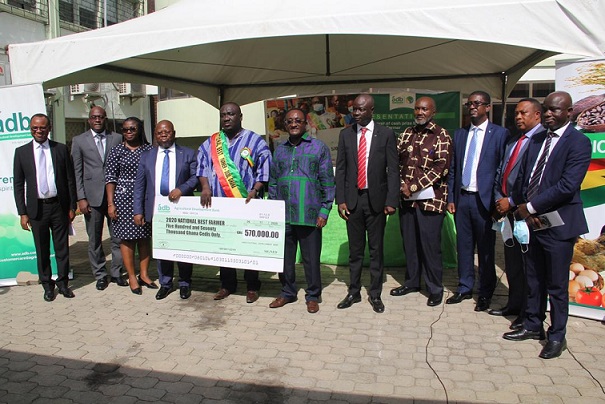 The amount was the ultimate prize to the Overall Winner of the 2020 National Farmers Celebration Award held in Techiman in the Bono East Region.

At a ceremony in Accra, the ADB Managing Director, Dr. John Kofi Mensa initially handed over the GHC570,000 cheque to the Minister for Food and Agriculture, Dr. Owusu Afriyie Akoto who in turn presented it to Mr. Solomon Kusi, the 2020 National Best Farmer.

Dr. Kofi Mensah said the Bank received an agri-business proposal from Mr. Kusi through the Ministry of Food and Agriculture in which he outlined how he was going to use the funds.

“Our Agribusiness Division perused the document and we are satisfied with all the things outlined by Mr. Kusi,”. He said.

According to the ADB Managing Director, the document indicated that part of the money would be used to acquire and install cocoa drying house, expand most of his current operations, employee more people, dig three boreholes, expand his mechanization centre and purchase more farming materials , seeds and feed.

“Our expectation is that by upgrading and expanding the mechanization centre, more farmers in his catchment area would benefit from mechanization services,” he added.

Dr. Kofi Mensah reiterated the Bank’s commitment to support all initiatives aimed at guaranteeing food sufficiency and ensuring that the Agricultural sector remained the backbone of the economy.

In his remarks, Dr Afriyie Akoto stated that Government and ADB had agreed to continue with the “flexible” arrangement that allowed the ultimate winner of the National Best farmers’ competition to decide how to spend the ultimate prize.

According to him, Government through the Agriculture Ministry was also looking at how to restructure the National farmers awards scheme to ensure that more farmers were recognized.

Mr. Solomon Kusi thanked ADB and the Ministry for fulfilling their pledge to him and gave the assurance that to all stakeholders that the funds would be judiciously utilized for the benefit of the agricultural sector.

Support to Agribusiness will remain our priority – ADB

Farmers must be appreciated and supported-2020 National Best Farmer