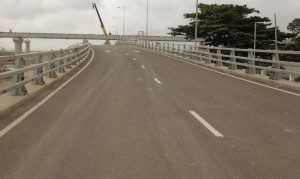 Mr. Japhet Festus Gbede, a member of the NDC’s communications team in the  Akatsi South constituency of the Volta Region, in a Facebook post dated today stated that Nana Addo’s government constructed a flyover which is just an elder brother of a bridge in his village, not an interchange.
Mr. Japhet, who stated that the project would have been commissioned by the Assemblymember of the region in which it was erected under former President John Dramani Mahama, further stated that President Nana Addo’s government has been praised worldwide for its mediocrity hence won’t be shocked if the entire government machinery is seen at tamale tomorrow as if the government renovated the united states of America.
An announcement from the presidency has revealed that on Tuesday, March 29, President Nana Addo Dankwa Akufo-Addo will inaugurate the Tamale Interchange Project.
The $48-million project is expected to ease vehicular traffic in the central business town of Tamale.
Roads Minister Kwesi Amoako-Attah earlier this year indicated work would be completed in March and commissioning would be done.
The Northern Region is benefiting from the $2 billion loans and a grant from the Chinese government under the Sinohydro deal meant to develop the country.
It will be recalled that some residents living around where the interchange was built expressed concerns over the project.
They complained about the small nature of some roundabouts accompanying the project and the poor drainage system.
The young NDC communicator reiterated that the project is the elder brother of a bridge in his village and should not be referred to as an interchange.
He chastised the government for borrowing over GHC350 billion and praised former President John Dramani Mahama for spreading interchanges around the country with the GHC50 billion he borrowed.
Send your news stories to newsghana101@gmail.com and via WhatsApp on +233 244244807 Follow News Ghana on Google News

Christians urged to worship God in spirit and truth