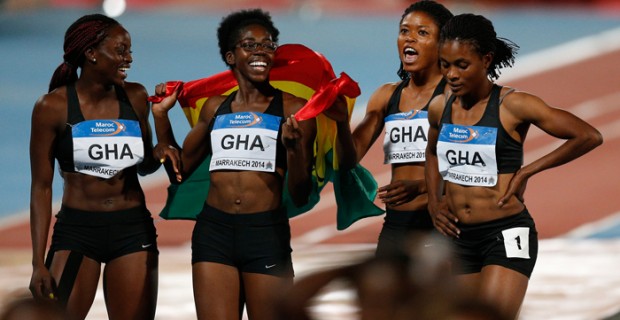 The Country Director of Adidas, Ms. Valerie Ghajar, has admonished three sprinters, who were selected to join the Ghana National Petroleum Corporation (GNPC) Speedsters Club, to believe in themselves and train hard to become future champions.

She said this, when she handed over to the athletes, kits at the Adidas House in Accra yesterday.

She noted that the quality of equipment would help them to perform better, after they had been nurtured and prepared by their coach.

She admonished the youngsters not to relent on their efforts on achieving their set targets in life adding that, they should attach seriousness to their training.

The trio have promised to give off their best to lift the nation high.

A representative from GNPC, Mr. Ato Kobbie, said his outfit desires to partner with the Ghana Fastest Human programme to give budding talents the opportunity to unearth talent and also support youth in sports.

The Ghana’s Fastest Human concept, which was initiated by former athlete Reks Brobby in 2013, has produced athletes including Emmanuel Dasor, Emmanuel Yeboah, Gifty Oku, Ida Mensah and Desmond Aryee who are all preparing for the next Olympic Games in Tokyo 2020.

Mr. Brobby hinted that, the three selected sprinters, who are currently on educational scholarship, would be handled by Coach Anslem Nyavedzie of AMASS.