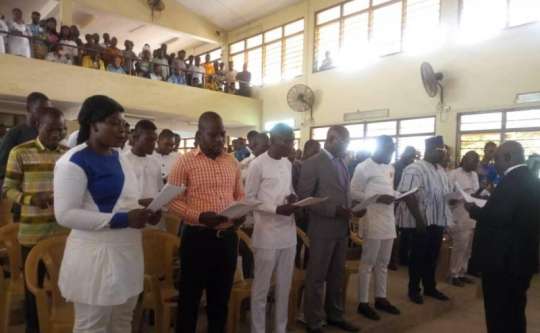 He said Assembly members could help their electorate settle disputes for peace to prevail but going ahead to make pronouncements on cases brought before them was totally out of their jurisdiction.

Mr Asubonteng cited instances where cases already decided by Assembly members later ended up in court saying, “pronouncements you make will not be binding on people and so they will not obey them and what happens is that one party becomes recalcitrant” thus, defeating the purpose for initiating the adjudication process.

He advised that Assembly members who had cases brought before them that needed pronouncements to visit the court for permission to proceed with out-of-court settlement, which would later be reported back to the court adding, such a process known as consent judgement “will now be binding on the affected party and failure to comply will attract punishment.”

The Magistrate made the call on Thursday when he led members of the Ketu South Municipal Assembly to swear oaths of secrecy, office and allegiance in a ceremony to inaugurate the Assembly following the successful conduct of the December 17 district level elections in the municipality.

Mr Perry Okudzeto, Deputy Minister, Youth and Sports in a speech to inaugurate the Assembly called on members to work together to address the needs of citizens for “unity is key towards delivering your mandate.”

The day also saw the election of Mr Samuel Haligah as Presiding Member of the assembly.

The new Presiding Member in an interview with Ghana News Agency said he saw his election as “just an exercise, no winner, no loser but to ensure the quality of debate on the floor of the assembly” and proposed a 3-day minimum orientation to equip members especially the new ones on Assembly proceedings.

The event chaired by Torgbui Pasaku IV, Chief of Hatsukope had in attendance Elliot Edem Agbenorwu, the Municipal Chief Executive of the area, Mr David Tiahno and Madam Dzifa Gomashie, 2020 parliamentary candidates of the New Patriotic Party and National Democratic Congress respectively, heads of departments and members of the public.