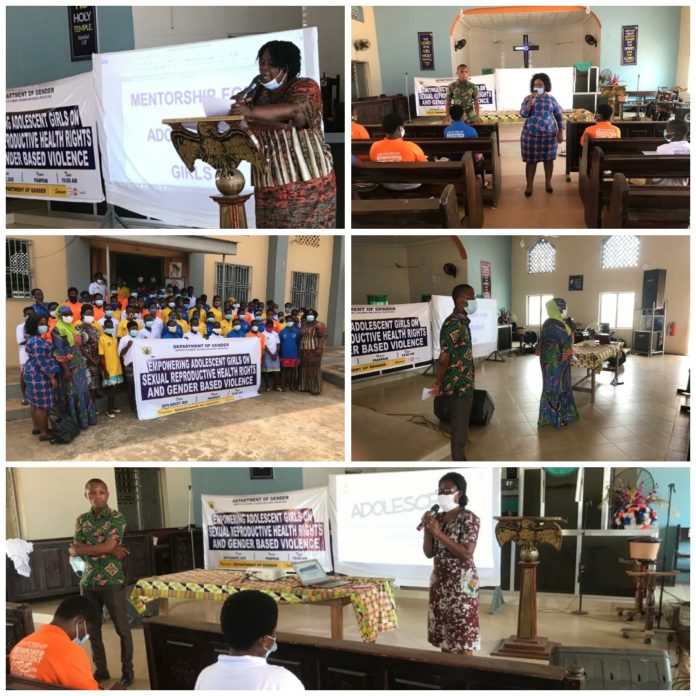 The mentorship programme was organized by the Department of Gender, Ministry of Gender, Children and Social Protection in collaboration with the Ningo-Prampram District Assembly (NIPDA) with support from the United Nations Population Fund (UNFPA).

Madam Banfro stated that even though there was some level of parity between boys and girls at the basic school level, the picture however, was not encouraging as they progressed on the academic ladder.

Some important factors that impeded girl child education and the realization of their goals were teenage pregnancy, Sexual and Gender Based Violence (SGBV), child marriage and the lack of comprehensive knowledge on their sexuality, reproductive health and rights, she said.

She disclosed that interactions by the Department of Gender with some adolescent girls over the years indicated that most girls, especially those in rural communities did not have role models, therefore, the need to link them up with people who they could aspire to, hence the pragmatic measures in place to step-up efforts to promote adolescent education, health and well-being.

She said the mentorship programme was aimed at educating the girls to become healthy and socially empowered, as well as be free from violence and any form of discrimination and early, child and forced marriage.

Madam Maribel Akuorkor Okine, Western Regional Director of Department, speaking on Sexual and Gender Based Violence, said parents must empower their children to believe in themselves and work towards achieving their goals instead of suppressing them due to their sex.

She said, gender-based violence was any act perpetrated against the will of a person because of their sex and gender, revealing that such violence could be sexual, physical, emotional, economic, and harmful traditional practices.

She noted that gender and sexual violence could have physical, psychological, health, social, and economic effects on the victims as well as the family and society.

Madam Okine therefore encouraged victims of gender and sexual violence to report to the Police and other relevant agencies for redress instead of resorting to an amicable settlement with pepertuators at home or by traditional and opinion leaders, stressing that such acts were criminal and must be treated as such.

Ms Naomi Ahortor, a Public Health Nurse at the Ningo-Prampram District Health Directorate, speaking on “adolescent sexual and reproductive health” took the girls through the tenets of adolescent health which included ensuring the physical and emotional wellbeing of adolescents as well as ensuring that they remained free from unwanted pregnancy.

Ms Ahortor urged the girls to abstain from sex to prevent contracting Sexually Transmitted Infections (STIs), and cutting short their dreams because of teenage pregnancy, revealing that the Ningo-Prampram District recorded 439, 448 and 515 teenage pregnancies respectively in 2017, 2018, and 2019.

Madam Zubaida Damago, Gender Desk Officer at NIPDA, on her part, entreated the girls to believe in themselves and focus on their schooling and apprenticeship in order to be economically empowerment to secure a good future.

Madam Damago, who also doubled as the Development Planning Officer of NIPDA, also urged them to serve as peer educators in their various communities by imparting their acquired knowledge on gender violence to their friends and stressed the need to report such crimes.

Representatives of the Ghana Education Service and NIPDA reiterated the importance of such mentorship programmes for adolescents and called for more of such programmes.