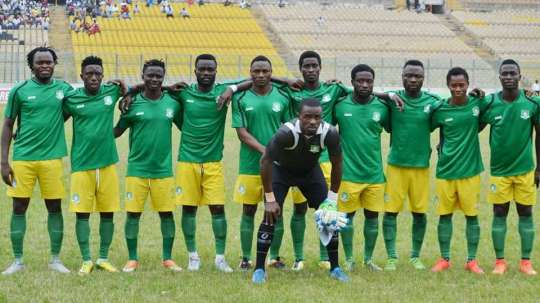 Aduana Stars recorded an impressive 1-0 away victory against Great Olympics in match-day two of the 2019/20 Ghana Premier League played at the Accra Sports Stadium.

Substitute Nana Richard Kwasi scored a late goal in second half added time to make sure the Ogyaa Boys continued their good start to the season with record two wins so far.

Olympics started the game on the front foot with the early pressure and Haruna Jamaldeed could have given the home side the lead on the10th minute mark but his header from close range was saved by Aduana Stars goalkeeper Joseph Addo.

Aduana Stars responded very well afterwards and controlled the game as they search for the lead. Striker Yahaya Mohammed was very lively upfront and proved to be a tough striker to deal with.

Yahaya Mohammed half way through the first half beautifully teed up Justice Annan but his effort on goal narrowly missed the target.

The game was very lively with good attacking football from both sides but the Dade Boys created decent chances but lacked the needed cutting edge as the halftime went into recces scoreless.

Great Olympics started the second half in blistering fashion playing some beautiful football with the likes of Gladson Awako and Emmanuel Amartey in the midfield area.

Veteran striker Emmanuel Clottey nearly gave Olympics the lead on the 60th minute mark but his shoot on goal brushed off the goal post to the relieve of the Aduana defence who were caught ball watching.

Aduana Stars winger Pius Yeboah was gifted a massive opportunity on 70th minute mark but couldn’t loop his header over Olympics Goalkeeper Opoku Joshua who produce a magnificent save.

The chances kept falling for the Ogya Boys and the league’s top scorer Yahaya Mohammed should have grabbed his fourth of the season but Olympics goalkeeper Opoku Joshua delivered another brilliant save.

Substitute Nana Richard Kwasi scored the winner for the Ogyaa Boys in added time as they held on to record their second victory of the season.