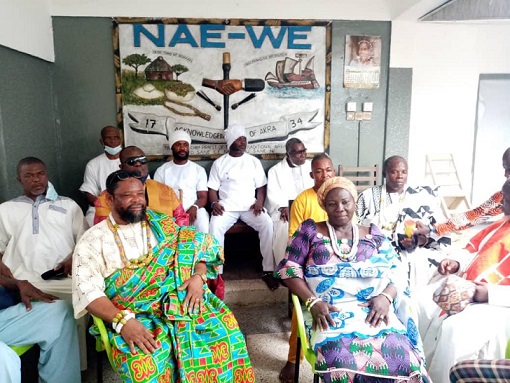 The Advisory Board for the office of the Greater Accra Regional Chief Imam has called on Nuumo Akwaa Mensah III, NAE Woumo, the Highest Chief Priest of the Ga State to introduce its members to him.

The Board, which was inducted on May 8, 2021, is a 17-member board drawn from the various Islamic sects and Chiefs from other tribes and communities within the region.

The Nae Woumo of the Ga State in endorsing the Board urged them to perform their roles and religion to ensure that there was peaceful coexistence between Muslims and the traditional believer in the region.

He said as part of the efforts to enhance peace and cohesion between the indigenous cultures in the region and the Muslim faith, his office had helped in the construction of some mosques within his community.

The Chief Priest urged the board to use the religion to deepen the Ghanaian cultures and traditions in the region and advised them not to forget their cultural identity and heritage in the practice as it was an essential in them indigenous Ghanaians and for that matter Africans.

Nae Woumo stated that being a Muslim did not change tribal identity as Ghanaians and they should use the opportunity to develop the country into a great nation.

Alhaji Suleman Nortey Dowuona, the Greater Accra Regional Chief Imam said he would use his office to foster peace and mutual coexistence between Muslims and the other religious faith in the country and the Islamic religion did not discriminate and he would adhere to such principles during his tenure in Office.

Alhaji Dowouna urged all the sects within the Islamic religion in the region to come together to forge ahead on issues that would help improve the well-being of the Muslim umah in the region and expressed his delight about the acceptance of his investiture and also the Advisory Board, adding, “we appreciate the advice impacted on us by the Chief Priest.”

Mr Abubakar Muhasinu Samori, the Zongo Chief of Nii Okaiman and Chairman of the New Advisory Board said Ghana’s Constitution guarantees freedom of religion and worship that signified mutual coexistence among other faiths, adding that, the new board under his leadership would build consensus with other religions to help move Ghana forward.

He added that his outfit would pursue policies of togetherness to create the understanding and eliminate any misunderstandings that existed among the various sects of the Muslim faith and other faiths.

Mr Samori said the Nae Wulomo’s advice was full of wisdom and inspiration, which was going to take them along the way towards promoting the religion.

He was grateful to the Chief Priest for accepting them into his bosom and that they were committed to doing their work diligently and successfully.

The Chief Imam and the Advisory Board members was sworn in to help steer the affairs of the office and to ensure the welfare of Muslims in the region.