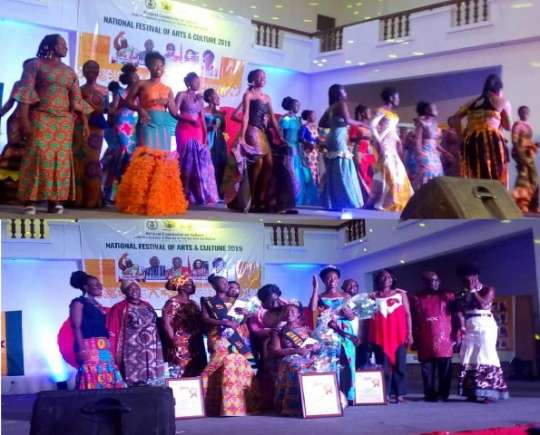 Adwoa Ohenewaa, a 25 year old graduate nurse, has been adjudged Face of National Festival of Arts and Culture (NAFAC) 2019, in a keenly contested competition at the ongoing NAFAC in Kofordua.

Out of the 29 contestants representing all 16 regions in the country, Miss Ohenewaa who represented the Western North Region, emerged as the overall winner and received a cash price of GH1, 000.00, a two- year ambassadorial contract with the Ministry of Culture, Tourism and Arts, a citation and assorted gifts.

The show held at the Centre for National Culture Auditorium in Koforidua, last night, witnessed thrilling cultural and traditional performances by contestants and top Ghanaian musicians such as Sherifa Gunu.

The night full of glamour, elegance, beauty and tradition was organized by the National Commission for Culture under the Ministry of Tourism, Arts and Culture, to search for a queen who would promote the Ghanaian culture for job creation.

Sherifa Gunu advised the contestants that in whatever they found themselves doing, they should do it well and try to promote the Ghanaian culture wherever they went to give a good representation of Ghana.