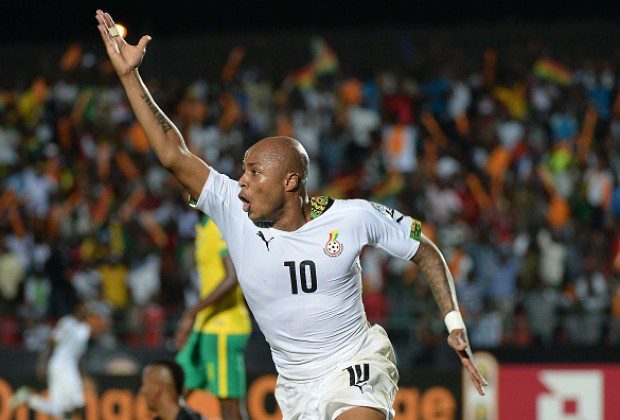 Ghana winger Andre Ayew has been rated as the best contributor to goals so far at the 2015 Africa Cup of Nations in Equatorial Guinea by a leading football statistics agency.

According to one of the world?s leading football statistics agencies Whoscored, Ayew is the most important and leading contributor to goals in Africa?s flagship football tournament.

The Marseille playmaker has been influential for the Black Stars in their march to the quarter final by scoring in the final goal that secured the 2-1 victory over South Africa on Tuesday.

He set up defender John Boye for the first goal that helped the Black Stars to equalize before his goal that steered Ghana to top the Group of Death.

In Ghana?s opening game against Senegal, Ayew opened the scoring in the match that saw the Black Stars lose 2-1 to the Teranga Lions in the Group C game.

?Andr? Ayew: Has directly contributed to more goals (3) than any other player at the Africa Cup of Nations #AFCON2015,? Whoscored posted about the contribution of the youngster.

Andr? Ayew: Has directly contributed to more goals (3) than any other player at the Africa Cup of Nations #AFCON2015

Ayew?s goal secured a fifth straight Afcon quarter-final berth for the Black Stars and made sure Ghana recorded a first ever win against Bafana in the competition.