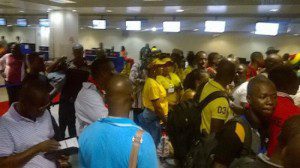 Despite the severe economic challenges confronting Ghana, Starrfmonline.com has uncovered that government is spending about $165, 000 to fly 250 fans in two chartered flights to Equatorial Guinea to watch the Black Stars? semi-final game tonight.

Starrfmonline investigations have also revealed that the travels are being coordinated from the office of the Chief of Staff which has angered workers of the Sports Ministry who feel sidelined.

Checks have revealed that travel agencies are charging between $650-$700 for a round trip from Accra to Malabo per head. The government, according to highly-placed sources, is using the Ghana National Petroleum Corporation (GNPC) as a smokescreen to avoid any public flak.

?The amount could even be more,? a source said.

Starrfmonline.com can also confirm that government on Sunday enplaned over 300 supporters including Ministers of State, officials of the GNPC, football administrators of some clubs in the country and fans of the various supporters unions to watch the quarter-final clash against Guinea Conakry.

The move is contrary to a view shared by the World Cup commission probing Ghana?s participation at the 2014 World Cup that it was unnecessary for government to sponsor fans to tournaments since it is just a waste of public funds.

A section of Ghanaians have expressed their indignation at the decision to carry fans to the continent?s football fiesta as Ghana is currently before the International Monetary Fund for a financial bailout to stabilise a staggering economy as well as boost domestic reform.

Ghana is currently reeling under a litany of economic hardships. The local currency, the Ghana Cedi, has plunged by about 40 percent in value against the US dollar and other major currencies.

According to information picked up by Starrfmonline.com, Travel Matters ? a travel and tour agency ? owned by an NDC MP and which was heavily involved in transporting fans to Brazil during the 2014 World Cup is the sole agency handling the travel arrangements of the fans to Equatorial Guinea.

Some fans who spoke to Starrfmonline on condition of anonymity revealed that they were called by the Sports Ministry to submit their passports and other details for their travel arrangements to be finalised.

It is, however, unclear whether the two planes that conveyed the fans to Equatorial Guinea would return with them after the game on Thursday night in Malabo, or wait until the final on Sunday, should the Black Stars win the semi-final game.