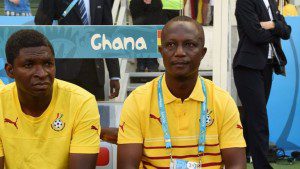 The stock of Ghanaian trainers is rising as two coaches from the country will lead two sides in Group I of the qualifiers for the 2017 Africa Cup of Nations if Kwesi Appiah is appointed by Sudan by next week.

He will join his compatriot Sellas Tetteh to make it two Ghanaian coaches in the qualifying group that does not include Ghana.

Appiah has been contacted by the Sudan Football Association (SFA) for the vacant job of the Sudan national team following Mohamed ?Mazda? Abdullah resignation as coach of the Nile Crocodiles following their 0-4 defeat to Gabon over the weekend.

Appiah, who is the current coach Sudanese side Al Khartoum, will hold talks with the SFA on Friday before the offer is tabled.

Tetteh supervised Sierra Leone to hold defending African champions Ivory Coast in a 0-0 draw in Port Harcourt on Sunday, in their Group I of the 2017 Africa Cup of Nations qualifiers.

He was appointed last month following a recommendation by the Ghana Football Association (GFA).