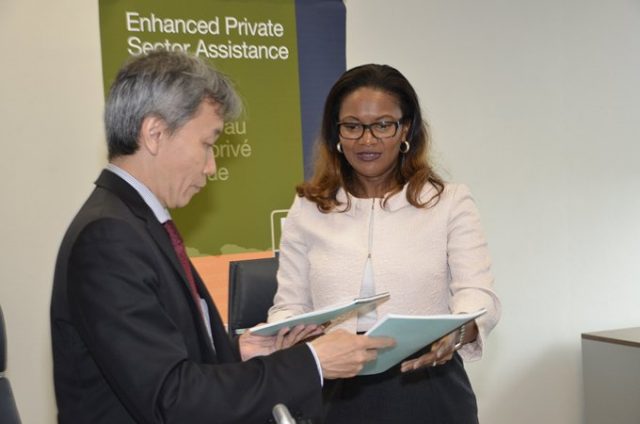 The Japan International Cooperation Agency (JICA) has signed a JPY 34.41 billion (about US$ 300 million)  loan agreement with the African Development Bank under the Enhanced Private Sector Assistance (EPSA) initiative which is a component of Japan’s Official Development Assistance (ODA) to Africa.

The “Seventh Private Sector Assistance Loan” carries an interest rate of 0.35%, to be repaid in 40 years after a 10-year grace period. The loan is intended to promote economic growth and reduce poverty in Africa by supporting the private sector through the AfDB’s non-sovereign window.

Speaking at the signing ceremony, N’Sele thanked the government and people of Japan as well as JICA for their continuous support to the AfDB and the African continent under the EPSA Initiative.

The loan agreement marks the conclusion of the 2nd phase of the EPSA Initiative and the beginning of the 3rd phase, which was announced at the 6th Tokyo International Conference on African Development (TICAD) held in Nairobi, Kenya in August 2016. The 3rd phase has a joint target of over US$ 3 billion for the next three years.

The Acting Finance Vice President emphasized the importance of the EPSA Loans that have reached a cumulative US$ 1.5 billion since 2007. “JICA is a very strategic partner of the AfDB and a major contributor to development in Africa. Your support in promoting private sector growth, quality infrastructure and alleviating poverty has helped the Bank to grow its private sector portfolio more than ten-fold since the inception of the EPSA Initiative just over a decade ago. In line with the Bank’s High 5 priorities, all of which involve the private sector, the Loan will contribute to further growth of the Bank’s non-sovereign operations,” she said.

Director General Kato observed that JICA’s priorities for Africa are fully aligned with the High 5s and affirmed JICA’s intention to achieve the US$ 3 billion joint target for the 3rd phase of EPSA over the next three years.