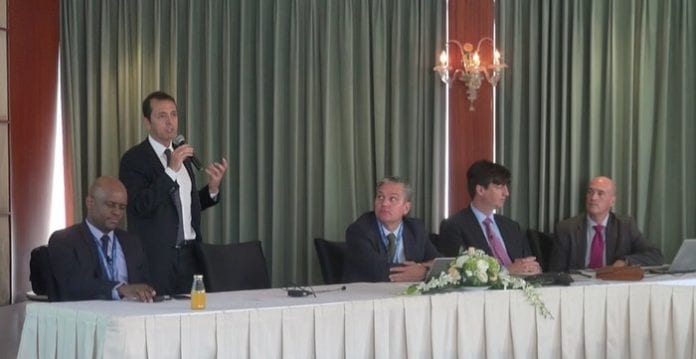 The landmark securitization instrument, a first for any multilateral development bank, has been described by investors as a “strong market fit.”

The instrument offers other multilateral development banks and investors a roadmap for innovative financing and new ways to explore the release of much-needed capital to impact financing and catalyze private capital in developing markets.

“This is particularly important, as it opens the door for significant scale in the future, both in Africa and in other continents where your institutions are present and financing development projects,” said Swazi Tshabalala, the Bank’s Vice President of Finance.

About 70 participants from the international finance community – investors, bankers and other financial institutions, attended the workshop entitled “A Look at Optimizing MDB Balance Sheets Through Securitization, “organized by the African Development Bank and the Mariner Investment Group, LLC (Mariner), a key investor in the deal.

The participants heard presentations on the structure of the securitization, challenges and lessons learned, followed by a question and answer session.

The workshop took place on the sidelines of the International Monetary Fund and World Bank annual meetings and the 2018 Global Infrastructure Forum in the Indonesian island of Bali.

The AfDB’s Chief Risk Officer Tim Turner said the meeting was convened in response to massive interest from sister development institutions following the announcement of Room2Run in September, 2018.

The Bank, the European Commission, Mariner Investment Group, LLC (Mariner), Africa50, and Mizuho International plc announced the pricing of Room2Run on 18 September in Ottawa, Canada – the first-ever portfolio synthetic securitization between a Multilateral Development Bank (MDB) and private sector investors, pioneering the use of securitization and credit risk transfer technology to a new and previously unexplored segment of the financial markets.

Tshabalala said Room2Run was timely in the light of new regulations in banking that would see more traditional commercial bank lenders scaling back some of their activities in the project finance and trade finance markets. “These regulations will make investments in regions such as Africa more expensive and capital intensive, and this is why we have to find new avenues to crowd-in non-traditional sources of funding, ” Tshabalala said.

Describing Room2Run as the “crown jewel of our impact activity, Andrew Hohns, Lead Portfolio Manager of the IIFC Strategy, Mariner Investment Group, said that there is a common misconception about the performance of MDB’s loans as unattractive; but the risk perceptions were often unbalanced”, he said.

“These assets have performer pretty well,” Hohns, said, giving reasons for Mariner’s global involvement with impact financing – nearly US$14 billion of infrastructure assets covering 1,250 projects world-wide. Hohns said the investor’s decision to partner with the Bank rested on its strong track record. The Bank is by far the most positioned of institutions on the continent to offer this kind of securitization, he said and synthetic securitization deals such as Room2Run were a “strong market fit.”

“The level of interest in taking exposure to the assets within the MDB’s is high,” Hohns said.
Kay Parplies, Head of Unit Investment & Innovative Financing, European Commission, said Room2Run was “catalytic” and hoped its involvement would attract other private investors and rating agencies to refine their approaches to African assets. Parplies said our experience over two decades had shown many in the investor community that actual risks (in African investments) were often lower than the perceived risks.

Room2Run Roadmap to be shared with MDB’s
Turner said the Bank would soon publish a detailed journey of the Room2Run initiative, including all the documentation involved in its set up, to encourage other MDB’s to consider adopting synthetic securitization models to free up capital and create new pathways for institutional investors to support development.

The document would be a “technical manual” to help others lower the cost and shorten the time to develop similar transactions.

“There is no need for our development partners to redo what we did. This is a knowledge sharing session of learnings from the school of hard knocks,” Turner said.

By creating new pathways between those with savings and those needing capital for development projects, Room 2Run would generate excitement within investment spaces normally far removed from development financing.

“Imagine a pensioner in Toronto knowing that his retirement investments are financing a power plant that was giving electricity to a family in Yopougon (Cote d’Ivoire). It’s a win-win.”, Turner said.

Structured as an impact investment, Room2Run is designed to enable the African Development Bank to increase lending in support of its mission to spur sustainable economic development and social progress.
Synthetic securitization and other similar models are intended to bring together public and private capital to finance development.

“MDB’s need to look at more than the financial return,” Bank Director of Syndication & Co-Financing, African Development Olivier Weck said, adding that the Bank had itself invested time to educate its board about the deal. “We needed to demonstrate additionality and the development outcome,” Eweck said.

Room2Run, positions the Bank as an innovative leader in providing lending in pursuit of the global development agenda, which prioritizes its own High 5’s and the Sustainable Development Goals. Freed-up capital will be directed toward renewable energy projects in Sub-Saharan Africa, including projects in low income and fragile countries.

“The Bank is treating this (Room2Run) as a pilot project,” Hohns said. “Mariner is very much interested in doing more.”