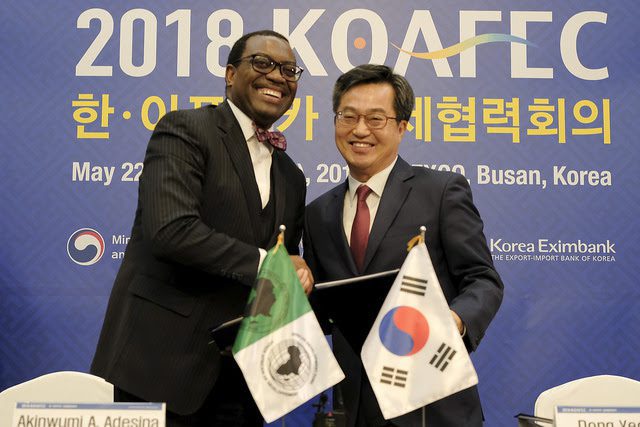 The Government of Korea and the African Development Bank have signed a Letter of Intent to launch the Korea-Africa Energy Investment Facility (KEIF) to provide significant support to the New Deal on Energy for Africa, which aims to achieve universal access to energy.

The signing, which took place on Tuesday, May 22, 2018 during the Korea-Africa Economic Cooperation (“KOAFEC”) meeting at the African Development Bank’s Annual Meetings in Busan, builds on the 2016 KOAFEC Ministerial Conference, which recognized enhancing access to energy as a strategic factor for the modernization and transformation of African economies. The Facility will contribute towards Africa’s efforts to achieve universal access to energy and to transform its energy systems.

Under this Facility, the Bank will take the lead in project development in close consultation with Regional Member Countries. Korea stands ready to provide US $600 million over a period of five years in both concessional and non-concessional finance for a variety of energy operations that will support the provision of electricity for homes, schools, hospitals, agriculture and industries. The Facility will support the full range of activities – preparation, construction and operations, through a mix of financing and technical assistance.

Korea also signed a Memorandum of Understanding with Power Africa during the same event underlining its intention to support the African power sector, notably transmission-line infrastructure. The African Development Bank is a founding partner of the United States-led Power Africa initiative and envisages working closely with Korea and Power Africa.

African Development Bank President Akinwumi Adesina thanked the Government of Korea for its longstanding support to the AfDB and to the African continent and welcomed Korea’s support for the New Deal on Energy for Africa through this Facility, which he said would be “an important contribution towards achieving universal energy access in Africa.”

Korea’s Deputy Prime Minister and Minister of Strategy and Finance, Dong Yeon Kim, stressed that “Africa is struggling with shortage of power which is why Korea strongly supports the Light up and power Africa High 5 of the African Development Bank including through the Korea-Africa Energy Investment Facility.”

The Bank and the Government of Korea will work on the detailed implementation arrangements over the coming weeks to be able to effectively support projects as early as the end of 2018.

AfDB and the AfCFTA Secretariat partner to stimulate industry

China allows US siblings detained since 2018 to return home