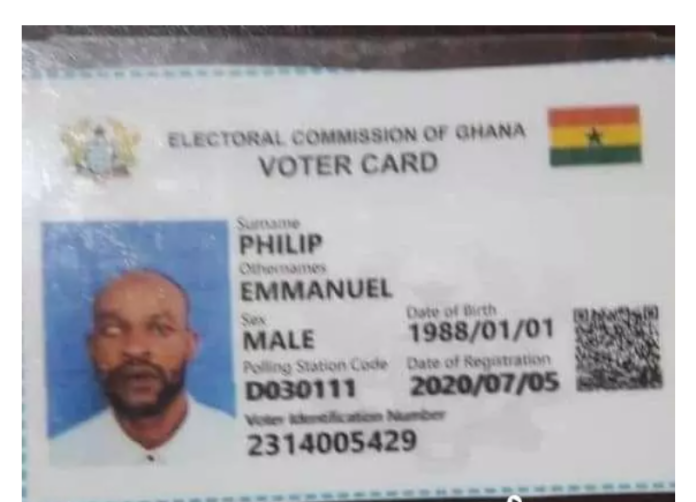 Emmanuel Philip, a Nigerian has been arrested by the Aflao Sector Command of the Ghana Immigration Service (GIS) with the new voters’ identification card.

According to Assistant Inspector, Mr Felix Klu-Adjei, Volta Regional Public Affairs Officer of the GIS, the suspect was intercepted on July 6, this year, at about 1333 hours, when he attempted to enter Ghana territory through the main Aflao border illegally.

He said a search on him revealed the card with registration number 231400549.

He said the suspect admitted in his written statement that he lives with Mr Jerry Azametsi, a native of Aflao and his wife Madam Abigail Azametsi of Aflao.

Mr Klu-Adjei said Philip mentioned the Azametsi family as accomplices and guarantors to the illegal acquisition of the new voter card at a registration centre the previous day.

Subsequently, the couple were invited to GIS to assist in investigations.

He said Azametsi admitted in a statement that the suspect is a Nigerian friend, who lives in the Republic of Togo, however the suspect frequently visits him in Ghana.

The Public Affairs Officer said Mr Azametsi confessed during interrogation that he advised his friend to cease the opportunity to acquire the card, which eventually led him to serve as guarantor to the suspect.

The trio were handed over to the Aflao District Police for further investigations and subsequent and prosecution.

In a related development, the Aflao Sector Command of GIS has repatriated seven Togolese nationals to their home country.

The seven had entered the country through unapproved routes of the border and were released to the Togolese border officials after going through the COVID-19 mandatory quarantine.

The Regional Command of GIS admonished all to respect and abide by the laws of the Service at the various border enclaves, while promising to do business only with genuine entities.