It has emerged that majority of persons in Aflao and its surrounding communities in the Volta Region have boycotted the Assembly Elections due to what they described as intimidation from some persons deployed to supervise the exercise. 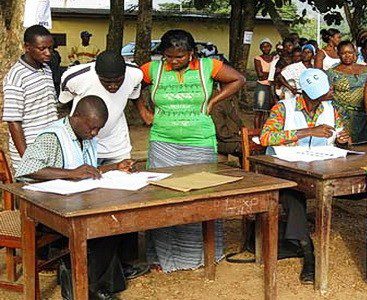 Some people who are neither police personnel nor custom officers have been deployed to polling stations where the District Assembly election was held in Aflao.

Speaking to some residents and potential voters, they indicated that they have decided to boycott the elections because one Hope Sodzinshie who is believed not to be a Customs officer nor a policeman was deployed by the sector Commander to supervise the elections.

According to one Dela Kusorgbor, a polling station agent in the area, people decided not to vote because of Hope Sodzinshie?s presence at the poling stations.

He noted that Hope Sodzinshie has been noted for his intimidating character against business men and women who use the Aflao border as entry points even though he was once expelled from the service, he is still parading himself as an official.

Dela Kusorgbor blamed the Customs Commander in Aflao for the low turn out in the area.

The District Asembly election was initially slated for March 3 2015, but was suspended in February when an aspiring assembly man, Benjamin Eyi Mensah dragged the EC to court after he was denied the opportunity to file his nomination forms.

The EC later sent to Parliament, a new legislation to enable it run the District Assembly Elections.
Meanwhile, A combined team of security officers numbering more than 2,000, have been deployed across the country to protect ballots and maintain security during Tuesday?s District Assembly elections.