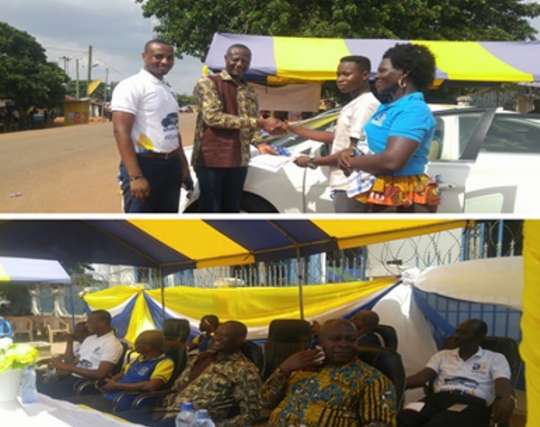 The Afram Community Bank Limited (ACB) has presented a brand new Hyundai Sonata to Mr Francis Sawle, a customer at the Maame Krobo branch of the bank.

This was after he won the 12-month ‘ASEDA PROMO’ promotion organized by the bank.
Mr Jeffrey Konadu- Addo, the Board Chairman of ACB, said the Bank was repositioning itself as a modern, progressive and customer-centered bank.

‘We are also rolling out exciting products and services that will improve customers’ investments and create wealth for th0em,’ he said.

Mr Konadu- Addo said the ‘ASEDA PROMO’ was the first, after the bank’s re-branding last year.

He said under the promotion customers and prospective customers have to top-up or open an account with GH¢1,000.00 or multiples of which is held for a period of 12 months to enable the customer to qualify to participate in the promotion.

Mr Konadu-Addo said 21 other prizes would be presented to other winners in the promotion.

He said the 21 prizes that would be presented include fridges, blenders and television sets.
Mr Konadu-Addo urged customers both new and old to deposit their money with ACB, as they stood the chance of winning great prizes in the promotion.

He assured customers of the bank that their deposits would also earn meaningful interests.