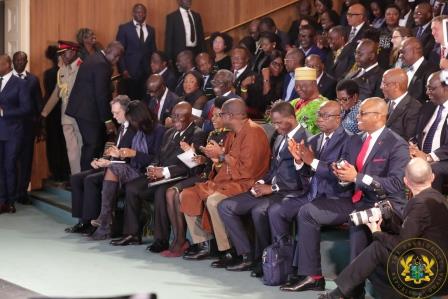 President Nana Addo Dankwa Akufo-Addo has stated that Africans should be utterly concerned that the Continent looses, annually, more than $50 billion through illicit financial outflows.

He said the revelation by a report of the panel chaired by former South African President Thabi Mbeki on Illicit Flow of Funds (IFFs), that between 2000 and 2008, some $252 billion, representing 56.2 percent of the illicit flow of funds from the continent, was from the extractive industries, including mining, should give all Africans “cause for pause”.

“No one is going to sort out these matters for Africa, except Africans themselves,” he said when speaking at an event organised by the Royal Africa Society, Facebook and the Ghana 60 years on Committee, on the theme “Africa Beyond Aid”, in the United Kingdom on Tuesday.

“We need to have our own bright and sharp lawyers to keep us abreast with the sharp and bright lawyers that our trade partners have.

We need to have our own bright and sharp technologists to keep us abreast with our competitors,” he said.

With the vast majority of the population being young, the President said it was in the interest of the whole world that Africa works.

Thus, African leaders should do everything possible they can to strengthen the African Union (AU), President Akufo-Addo urged.

“With Africa’s population set to reach some two billion people in 20 years time, an African Common Market presents immense opportunities to bring prosperity to our continent with hard work, enterprise, innovation and creativity.

“It is evident that the time for African integration should be now. Hence, the importance of the success of the Continental Free Trade Area,” he added.

It is for this reason that President Akufo-Addo advocated for a new paradigm of leadership on the continent.

The new African leaders, he said, must be committed to governing their peoples according to the rule of law, respect for individual liberties and human rights, and the principles of democratic accountability; and must be determined to free their peoples from a mindset of dependence, aid, charity and hand-outs, and must be bent on mobilising Africa’s own immeasurable resources to resolve
Africa’s problems.

“This new generation of African leaders should help bring dignity and prosperity to our continent and its longsuffering peoples,” the President said.
GNA/Newsghana.com.gh