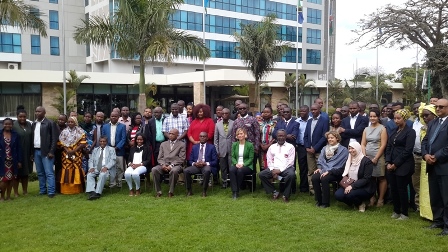 “Ethical journalists can contribute to a better society through genuine professionalism,” Justice Sylvain Oré, the AfCHPR President, stated at the opening of the media training for senior editors and journalists from Southern, Western, Central and Northern Africa in Arusha, Tanzania. Justice Ore recounted vivid memories of how the media had exposed human rights violations and offered an arena for different voices to be heard in public discourse which befits the name the Fourth Estate.

“However, the power of the media can also be misused to the extent that the very functioning of democracy is threatened or undermined,” he said.

The AfCHPR President said: “It also happens that the media unnecessarily and unfairly abuse the privacy and integrity of ordinary people through sheer carelessness and sensationalism and, thereby, cause considerable damage to individuals for no good purpose at all”.

Ms Karin Pluberg, the GIZ Representative to the African Court, admonished journalists to take keen interest in the mandate of the court which seeks to strengthen the human rights protection system in Africa.

The African Court also seeks to ensure respect for and compliance with the African Charter on Human and Peoples’ Rights as well as other international human rights instruments, through judicial decisions.

Ms Pluberg stressed on the need for journalists across the continent to show interest in the protection and promotion of human rights.

Mr Nouhou Diallo, the Deputy Registrar of the African Court, said the court operated on five main strategic objectives: to exercise jurisdiction in all cases and disputes brought before it concerning the interpretation and application of the Charter, the protocol and any other relevant instrument relating to human rights ratified by the states concerned.

Other objectives are to collaborate with sub-regional and national judicial bodies to enhance the protection of human rights on the continent and to enhance the participation of the African people in the work of the court among other things.

Mr Diallo said the African Court also hinges on nine core values of the African Charter and other internationally recognized principles of human rights and the promotion of the rule of law.

The African Court also operates on the basis of non-discrimination and equality in the performance of its work based on the integrity of the judges and staff, provide equal access to all potential users and is responsive to the needs of those who approach it.

The media training is to sensitise participants on the broad framework of the African Union agenda on integration, development and shared values captured in the Agenda 2063 initiative and the African Governance Architecture (AGA).

Within the framework of the strategic module the scores of editors and journalists attending the programme would be trained from September 7 to September 10 in Arusha, Tanzania.

The pool of skilful and knowledge-based journalists would be ready to publicise the mandate of the court within the broad framework of the African Union.

It would focus on enhancing the professional skills of the journalists on how to report African Court stories for improved coverage and public awareness as well as establish a specific pool of journalists tagged as; “Champions of AfCHPR’’.