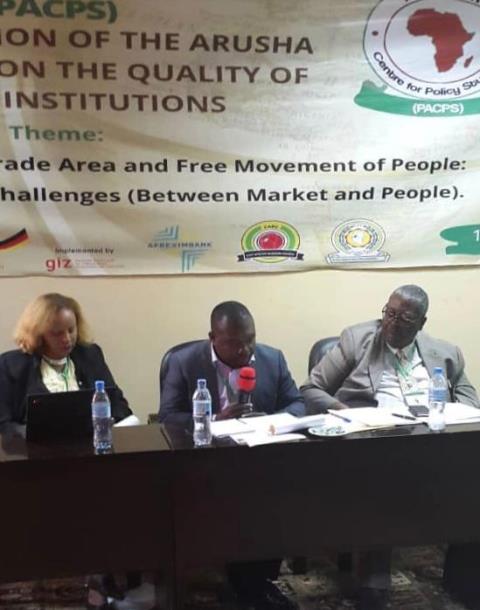 The Africa Centre for International Trade and Development (ACINTaD), has called on governments on the continent to sign and ratify the protocol on free movement of people to aid the successful implementation of the African Continental Free Trade Area (AfCFTA).

Mr Isaac Hubert Arthur, the Executive Director of the think tank dedicated to building trade development capacity and sustainable development in Africa, said so far only four member-states have ratified the Protocol on Free Movement of People.

“Implementing only the protocol on goods and services alone will not be enough to achieve an African Continental Free Trade Area,” he noted.

Mr Arthur made these known in Arusha, Tanzania during the second edition of the Arusha symposium on the quality of public institutions, an event organized by the Pan-African Center for Policy Studies (PACPS) with support from the German Agency for International Development Cooperation (GIZ).

The three-day symposium was held under the theme: “The African Continental Free Trade Area and Free Movement of people: Overcoming Implementation Challenges (Between Market & People).

Mr Arthur, who spoke on “Strategies to Harmonize or Create Coherence and Agreement at the Regional and Member States level,” said though the matter (the Free Movement of People Protocol and its implication for Member States.) was sensitive he believes goods cannot move across the borders without the people moving freely.

He said many Africans already move across the borders but within confined regions, adding that signing and ratifying the Free Movement of People Protocol though beneficial, would also require some form of legalization and control of movement across the borders to curb sovereignty and security concerns raised by some member states.

The Executive Director said in any free trade area, not only is economic integration vital, but it also creates avenues for supply of human capital in sectors with low skills and labour shortages, which can in turn contribute to economic growth.

He said it also encourages social integration such as sports, education, access to health facilities and other opportunities that would help in achieving the AU Agenda 2063 – The Africa We Want.

“ACINTaD believes that for the smooth implementation of the AfCFTA and to ensure an integrated continent, African governments must consider signing and ratifying the Protocol on Free Movement of People,” he said.

Mr Geoffrey Kamanzi speaking for the Chief Executive Officer of East African Business Council (EABC), said that the Protocol on Free Movement of People should be facilitated to ensure that the AfCFTA worked and brought the needed benefits.

The Symposium acknowledged that ECOWAS has great experience with free movement of people in its region and encouraged other Regional Economic Communities (RECs) to learn from ECOWAS.