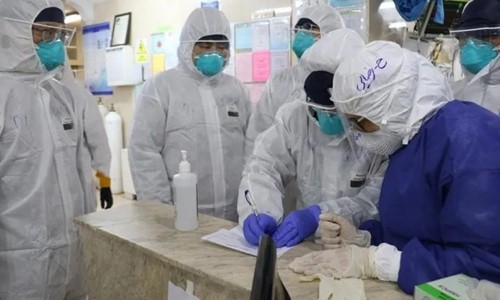 Africans have hailed China’s efforts and measures taken to curb the COVID-19 outbreak, expressing their keen interest to learn its experience as the African continent reported more and more confirmed cases.

China and Africa on Wednesday held a videoconference that connected 24 African countries and the African Union (AU) Center for Disease Control and Prevention (Africa CDC), whereby China expressed its commitment to sharing experience and supporting Africa in the fight against the epidemic.

The very purpose of the videoconference was to share China’s best experience with African countries as part of the Chinese commitment to supporting and assisting Africa in the fight against the epidemic, said Dai Bing, Director-General of the Department of African Affairs of China’s Foreign Ministry, in his capacity of chairing the videoconference.

The China-Africa Video Conference on COVID-19, which was opened with remarks and measures taken by China in the country, was followed by discussion, question and answer session, whereby Africa CDC and the 24 African countries took turns to forward various questions and points to the Chinese side, and the Chinese side responded accordingly.

Speaking on her part and asking question on testing, Liya Tadesse, Ethiopia’s Minister of Health, has hailed the videoconference, which the Chinese government has organized to share its experience in the battle against the epidemic.

The minister said her ministry is happy about participating in the videoconference and discussion by which she said China shares “amazing experience in curbing this outbreak.”

The Deputy Director of Africa CDC, Ahmed E. Ogwell Ouma, told Xinhua that the videoconference is a good example that the Chinese government has placed its experience on the table for Africa countries to be able to see and use in the fight against the epidemic.

“We are very impressed by the reduction in the numbers; and we think in a short while the outbreak should be declared finished in China,” he said, “The experience that China has undergone is very important for us, because our is just starting, while in China it is ending. That experience is very important.”

Speaking to Xinhua after participating in the video conference, Isaac Phiri, the deputy director for epidemiology and disease control in the Ministry of Health, said Zimbabwe required a wide range of assistance from personnel training, equipment and drugs.

“We require personal protective equipment. That is one of the most important equipment that we need. We also need laboratory equipment, rapid test kits and the new medication that China is using,” Phiri said.

Zimbabwe has not reported any confirmed case of the virus and President Emmerson Mnangagwa on Tuesday declared COVID-19 a national disaster to enable the government to mobilize resources towards fighting the virus.

He said continuous training for health staff on dealing with COVID-19 was required, noting that a Chinese medical team already in the country was helping local health officials with the training and case management.

Kenya’s Cabinet Secretary for Health Mutahi Kagwe said Kenya can learn from China’s experiences in managing the response to the COVID-19 outbreak.

“This is an extremely important step in terms of knowledge sharing and it gave us a tremendous amount of knowledge which we believe will also go a long way to assisting our people,” said Kagwe.

Abdoulaye Bousso, director of the Emergency Health Operations Center of Senegal’s Ministry of Health and Social Action, said Senegal is adopting China’s anti-epidemic model, which he believed was more effective than the European model, to combat the spread of novel coronavirus, after attending the videoconference.

xhina has taken effective measures to control the spread of the virus, and other countries should learn from the measures taken by China, he said.

Stating that China is almost winning the battle against the epidemic and that the country is seeing the light at the end of the tunnel, Dai said the victory is not only of China, but the outcome of global cooperation and solidarity.

He stated that China is committed from the start to international cooperation of fighting the epidemic guided by the vision and spirit of building a community with a shared future for mankind.

“China and Africa are good friends, partners and brothers, supporting each other all the time. Now the epidemic situation in Africa is challenging as more and more countries have confirmed cases,” he said, adding that China is ready to share its experience and provide support and assistance within its capability.

“We are confident that we will definitely win the battle against the epidemic with joint efforts,” he said. Enditem

Decoupling from China is not the answer

China expands cross-border use of RMB

China onto new level in utilization of foreign investment