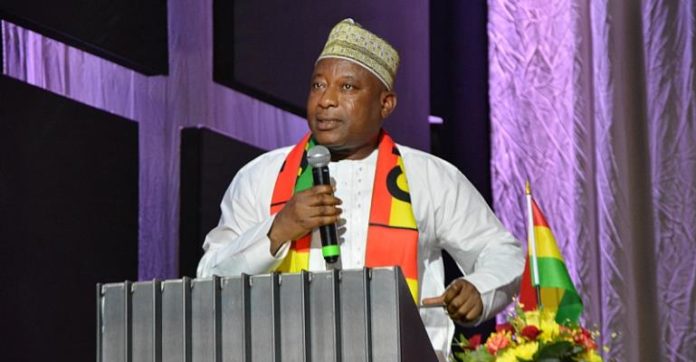 Mr Ziblim Iddi Barri, the Deputy Minister of Tourism, Arts and Culture, has said Africa must rise to the current challenges and rekindle efforts at achieving the total emancipation of the Continent.

He said the phase of the struggle may have changed but the determination to give the African an equal chance to exploit his inalienable right of freedom remained unchanged.

He said the persistent brutalities and injustice against African Americans pointed to an enduring, pervasive and bigoted world view, fuelled by feelings of racial superiority among sections of the Caucasian population.

“As people and especially as a continent we should rise to the challenge of our time,” he said.

Dr Barri said this at the launch of the Emancipation Day celebrations 2020 and Graphic Communication Group “Do Ghana” Festival in Accra on the theme: “Our Heritage, Our Strength” with the sub theme: “Leveraging our Resilience: Black lives Matter.”

He said Emancipation Day marked the abolition of slavery in the British colonies in 1834 and was an annual observance introduced in Ghana as the first African nation to commemorate the liberation struggle.

It was also to rekindle the frame of unity among black people everywhere and highlight the inter-connected nature of their struggles on the continent, in Europe and America.

“For this to be realised, however, there has to be genuine reconciliation between all the sons of Africa. The harsh reality of the Trans-Atlantic Slave Trade and its consequences cannot be denied but recrimination, suspicion, blame and mutual distrust between the African Diaspora and those on the continent will only perpetuate the exploitation of the blackman.”

“Dr Kwame Nkrumah and the stalwarts of his time were strong advocates for African unity because they understood that as a people, our destinies were inextricably linked and the strength of our unity was necessary to overcome the tremendous odds and challenges we had to confront,” he said.

“Emancipation Day should, therefore, always remind us of our common heritage and destiny and rekindle our commitment to the total emancipation and progress of Africa, and of our shared heritage as we use the vehicle of Tourism and the Creative Arts to strengthen the bonds of brotherhood between our peoples”.

He said the Ministry was also privileged to partner the Graphic Communications Group on the Do Ghana Travel Festival, which had a wide network and a big platform to showcase Ghana and promote domestic tourism.

“Domestic Tourism is one area that the Ministry is looking at developing, and we are happy to be part of this experience and look forward to an inspiring and successful festival.”

Mr Akwesi Agyemang, the Chief Executive Officer of the Ghana Tourism Authority, said over the years even as there had been improvement in arrivals, domestic tourism continued to be the major pillar on which the sector stood.

“An assessment of travels to the various tourist sites showed that 70 per cent of visitors are local travellers, and during this time of emancipation they are hopeful to see more domestic arrival of these sites.”

Assin Manso, Elmina and Cape Coast to Salaga among others have been earmarked as slavery heritage project sites, which had been published for procurement, he said, and expressed the hope that the next emancipation would feature those sites prominently.

Mr Franklin Sowah, the Marketing Director, Graphic Communications Group, said as the company celebrates its 70th anniversary this year, and being a brand that had influenced lives and informed people, its partnership with the GTA was timely to ensure consistent tourism development.

“We are also excited because we are interested in the need to support the industry players as a result of the impact of the COVID-19 on the sector and we are hoping that this initiative would contribute to the subsequent steps needed to ensure the industry’s survival and growth in Ghana.”

Mr Sowah said the industry contributed substantially to the economy and by large the fourth foreign exchange earner, which clearly indicated its importance, hence the need to support the sector.

“We believe that tourism is critical in terms of recreation and healthy lifestyle and together we can revive the sector, create a new acceptance of domestic tourism, and improve the economic status of people.’’

“We would create virtual tours of interesting sites across the country so that people can sit in their homes and offices and see and experience Ghana.”

The Emancipation celebration begins on July 27, with wreath laying at the Kwame Nkrumah Memorial Park, W.E.B Dubois Centre and the George Padmore Library, then a virtual panel discussion on the sub theme on July 28.

There will be a tree planting exercise at Assin Praso Village on July 30, reverential night at Cape Coast Castle on July 31, and reverential gardens at Assin Manso with wreath laying ceremony on August 1.

The “Do Ghana” travel festival starts on July 15 to August 15 with activities including daily cultural and heritage snippets on radio and in Graphic titles, webinars, tourism trivia, shopping circus, tours, photo exhibitions, and street food festivals.