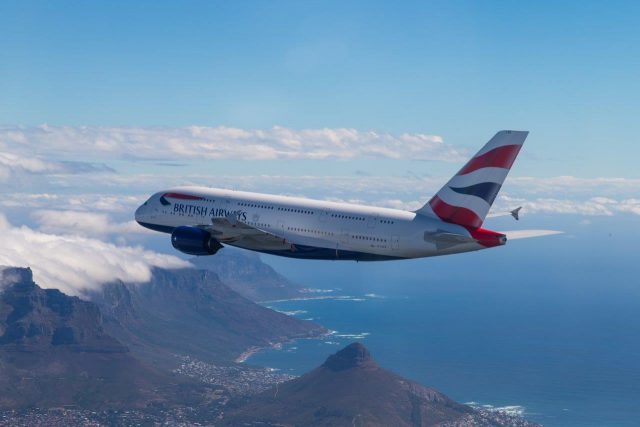 British Airways’ plans in Africa are not only limited to its recently announced investment in customer experience.
As well as the £400 million investment in Club World, the latest-generation technology in the air and on the ground, African customers will also benefit from additional capacity on African routes, new lounges and enhanced catering.

In South Africa the airline will add 680 seats a week to Johannesburg by operating an all-A380 service. From October 2017 customers will have a choice of two flights a day on one of British Airways’ most modern aircraft.

British Airways has also confirmed it will again operate its expanded Cape Town schedule, including three weekly flights from Gatwick, over the 2017/18 southern hemisphere summer. At its peak this schedule provides 19 weekly services between London and the Mother City.
The frequency of flights to Mauritius is increasing from three to five Boeing 777 services a week, upping capacity from Gatwick by 550 seats weekly.

It will also operate six weekly flights to Gatwick from Algiers.
“We’ve been working towards double-daily A380 services to Johannesburg, since it became one of the first routes to get the new aircraft three years ago. The additional capacity, particularly in the premium cabins, will be welcome news for our customers,” says Sue Petrie, British Airways’ commercial manager for Southern Africa.

“After a successful2016/17 summer season, we’re also very pleased to confirm the expanded schedule to Cape Town next summer. It’s testimony to the Mother City’s well-deserved reputation as one of the world’s top tourism destinations.”
More good news for African customers flying into Gatwick is that all operations have now been moved into the South Terminal, where a new premium check-in area has been created. Its distinctive bespoke stainless-steel feature wall creates privacy, while leather bench seating, with convenient power supplies, allow customers a space to pause and relax.

The new First and Club lounges, with sweeping views of the runways, have 40% more floor space. Other features include power sockets with USB ports in most seating areas and upgraded Wi-Fi; a study with project tables, PCs and a printer; modern shower suites with Elemis amenities; a hot and cold self-serve buffet; full bars and tea and coffee stations and; centrally managed lighting set by time of day in different zones.

At Heathrow’s Terminal 5 British Airways has launched a new ‘First Wing’ check-in area. It includes a dedicated two-lane security channel and direct access to the Galleries First Lounge and Concorde Room for the first time. The new security lanes will also reduce the number of travellers passing through the existing lanes, helping to speed up the journey.

The programme of lounge investment will see revamps of the Terminal 5 lounges as well as the Johannesburg lounge at OR Tambo. A new lounge is also being built at Jomo Kenyatta International, which will be shared with American Airlines.
Catering has been a focus across Africa and improvements have already been made across a number of routes, most recently Accra. Johannesburg will be the next route to benefit. In addition to improvements to the on-board menu a new service style is being introduced across Club World in September, with display trolleys allowing customers to select dishes from a choice of freshly prepared starters and desserts, providing an experience similar to that of a premium restaurant.

The on-board improvements extend to the latest-generation Wi-Fi, which will be rolled out across the long-haul network from April. Customers will be able to use their own devices to browse the internet, access email and check social media. In addition they will be able to stream video content from sites such as Netflix and YouTube.

Technology is also helping customers simplify and speed up their journeys through the airport. Customers are now able to self-service bag drop at Heathrow and Gatwick, enabling them to label their own bags and drop these off before proceeding through security.
Additionally British Airways has opened the first three automated boarding gates for UK domestic flights at Terminal 5. The gates use facial recognition to allow customers to simply scan their boarding pass before walking onto the aircraft.

Commenting on the investments, British Airways’ chairman and CEO, Alex Cruz, said: “It’s simple really – we need to deliver what our customers value most, where they value it most. We need to focus on enhancing premium – offering contemporary service, improved catering and lounges and a consistent experience. In economy, where we know that price is the driver, we need to focus our efforts on delivering more seats at the lowest fares and giving customers choices.”

Here’s a link to the video: