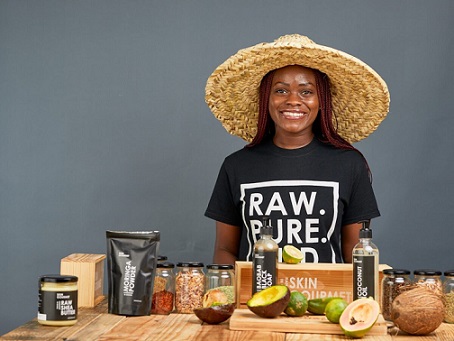 An award-winning young Ghanaian entrepreneur has implored the youth to concentrate on developing their entrepreneurial talents so as to become successful business-persons.

Violet Awo Amoabeng, the Founder and CEO of Skin Gourmet, said young entrepreneurs should be concerned “with everything that goes on in your business.”

The ABH Show Viewing Dinner Party featured the 2021 outstanding Top 10 African entrepreneurs, and documented their exploits in the competition for grant opportunities for their start-ups.

She was the second winner among the Top 10 ABH Heroes in 2021, who each garnered a share from a grant of US$1.5 million offered by the Jack Ma Foundation’s ABH initiative. Skin Gourmet produces well-packaged raw handmade skincare products sourced from the Wilds of Ghana –

She shared her experience in the continental competition; and the impact it has had on her entrepreneurship odyssey.

Awo Amoabeng said her team had been amazing in their work though they labored hard to bring smiles to their faces after she emerged a winner of the competition. She urged them to work harder and always learn in humility.

She applauded the ABH initiative and the Jack Ma Foundation for creating the opportunity for up-and-coming entrepreneurs to up their game. Expressing gratitude to Jack Ma, the billionaire co-founder of the Alibaba Group, one of the world’s largest e-commerce businesses, she stated: “without them we can’t exist.”

Zahra Baitie-Boateng, the Program and Partnership Manager of the Jack Ma Foundation, said the competition was a philanthropic initiative in which every contestants is a hero.

Baitie-Boateng said the 10 heroes compete with each other and they are expected to “come out with a unique solution with immense potential to benefit their country.”

She added that the ABH contest is meant to be fun and educative. In 2021, the 10 heroes came from Botswana, Egypt, Eretria, Ghana, Kenya, Nigeria and Rwanda. Global experts in corporate matters were the judges at the competition.

She said the ABH project aimed to support African entrepreneurs to leverage their businesses to become change makers. She observed that the prize money would help “propel their entrepreneurship journey,” and make them role models for other entrepreneurs in Africa.

Ghana is one of the countries that has benefited from the ABH opportunity in the past editions since ABH’s inception. The country’s entrepreneurs have received ABH grant totaling to over GhC1.47 million. Abdulai A Dasana, Co-Founder and Chief Operating Officer of Amaati Company Limited was among the 2020 ABH Top 10 Hero.

The ABH project directly supports talented and promising African entrepreneurs through its namesake prize competition. Each year the prize selects ten “business heroes” from across Africa that compete for their share of $1.5 million in grant funding.

During the competition, participants have exclusive access to training, mentoring and learning programs, as well as to a community of like-minded African business leaders.

The ABH prize competition, the Jack Ma Foundation’s flagship philanthropic program spotlights and celebrates Africa’s entrepreneurs from across 54 African countries and annually awards 10 outstanding African entrepreneurs with a share of a US$1.5 million grant.

Their outstanding entrepreneurship stories are documented from across various African countries and compiled into a yearly televised TV Show known as the ‘ABH Show.’ The show spotlights mission-driven and impactful African entrepreneurs who are working to make a difference in their communities, and helping to build a more sustainable, inclusive future through innovation.

Entrepreneurs/founders of start-ups from 54 African countries, from every sector, age group and gender, each year submit their applications in either English or French for an opportunity to win a share of the US$1.5 million ABH grant.

In November 2019, the Jack Ma Foundation held its inaugural ABH competition in Accra, where it identified 10 outstanding business heroes who were creating significant impact and driving change in their local communities.

Each of these heroes won their share of a $1 million in grant funds and were able to tell their stories to Africa and the rest of the world. In addition, the heroes received mentorship, training and networking opportunities.