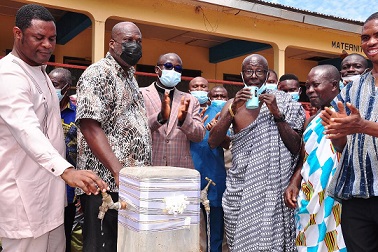 The renewed facility is expected to provide safe drinking water to over 7000 residents who were previously relying on raw water from the Afram River for their water supply needs.

The facility was constructed by the Millennium International Development Authority (MiDA), but abandoned by the community for a decade because of the salty taste of the water, which was sourced from a borehole.

After the rehabilitation works for the free flow of safe water, the chiefs and people of Ekye Amanfrom were highly elated and thankful to the telecom company for transforming the water facility for the community, which hitherto depended on untreated water.

Speaking at the inauguration ceremony, the Chief Executive Officer (CEO) of Afriwave Telecom, Mr Francis Poku, said access to safe drinking water was a fundamental right of every citizen.

“The provision of the revamped water facility means the community will have access to clean drinking water, which will turn to impact on the health and sanitation of the thousands who desperately need it,” he said.

He further noted that Afriwave, as part of its CSR activities, was not only providing quality water to communities in need, but also supporting education and youth in Information and Communication Technology.

He said the ICT has allowed students from public and private universities to learn on the job as interns and also as national service personnel.

Mr Poku assured the people that Afriwave Telecom would continue to invest in the communities that it operates.
The rehabilitated water facility derives its source of water from the Afram River via submersible pumps and pipes, which have been extended 750 meters into the river from the shore.

The raw water is channelled through treatment plants before it is pumped into storage tanks for access by the people of the community.

The Commercial Director of Afriwave Telecom, Mr Henry Searyoh, stated that Afriwave Telecom was a locally owned organization that has its people at heart and therefore considered it fit to rise to the call of providing potable water to the people of Ekye Amanfrom.

He said the company’s gesture followed a request published on Ghanaweb and Ghanaian Times of Tuesday, January 28, 2020, with the heading: “Kwahu Afram Plains residents cry for potable water.”

Mr Searyoh said providing water to the people of Ekye Amanfrom was a key ingredient to the fight against COVID-19 which the Government was doing its best to stop its spread.

He added that the company was not only interested in conducting its core business of interconnecting and providing innovative mobile service solutions to all networks, but investing in the communities in which it operated.

“Afriwave is a people-centred brand, and we are happy to touch lives by saving the residents of Ekye Amanfrom from drinking unsafe water,” he added.

Afriwave Telecom is a Ghanaian company established to provide telecommunications solutions in Ghana and beyond.

The operations of the ICH have brought several benefits to the Ghana telecom sector and Afriwave telecom has plans of extending its services to other parts of Africa, according to Mr Searyoh.
He trusted that the leadership of the community would work to ensure that the modernized water system was properly maintained to serve the benefit of the community.

The Chiefs and Assembly members of Ekye Amanfrom expressed their appreciation to Afriwave Telecom for supporting the community, adding: “We thank God and Afriwave for helping us”.

The community leaders promised to work towards ensuring the modernised water system would be properly maintained all the time.