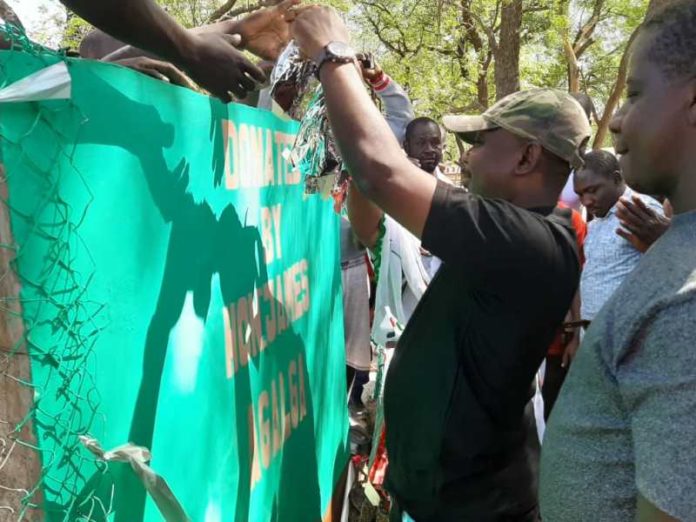 The Parliamentary Candidate (PC) for the Builsa North Constituency in the Upper East Region, Mr James Agalga, on Tuesday commissioned a newly constructed slaughter facility for the people of the Constituency.

Prior to the construction of the project, butchers in the area slaughtered animals for consumption under unhygienic conditions, which also exposed the unfenced slaughter area to animal invasion after close of work.

Speaking to the Ghana News Agency (GNA) in an interview after commissioning the facility, the former Deputy Minister for the Interior, said the whole of the Buluk area hitherto consumed their meat from the slaughter house under unsafe conditions.

“If I had the resources, I ought to have given this project out on contract for contractors to reconstruct the place for them, but as an opposition Member of Parliament, I have only 30 percent of the Common Fund allocation.”

He said in spite of the percentage, he had earlier supported some communities within the Constituency to put up classroom blocks Community-Based Health Planning and Services (CHPS) compounds among others.

“I decided to partner them (Butchers Association) to do the construction by themselves. They said they had the artisans, masons to do the work. So I decided to provide them with the materials that they needed to reconstruct the place,” the incumbent MP said.

Mr Agalga said “I am impressed with the finishing, the work looks good and I should be congratulating them for agreeing to partner with me to do this job.”

To critics who may say the initiative was done to canvass for votes, the PC, who is also the Ranking Member of the Defence and Interior Committee of Parliament, said “This work did not start yesterday. It is several months work.

Today is the day set by the Butchers Association itself for the commissioning of the work that has been completed.
“If we had cut sod today, you could say we are doing it to deceive the people, but this is work completed and so any attempt to water down on the achievement that we have choked today will be untenable. Work is completed, it ought to be commissioned for the people to start ripping the benefits,” Mr Agalga said.

Mr Mohammed Alidu, a representative of the Chief Butcher, Mr Bawa Adamu thanked the MP for the gesture, saying “We hope and pray that whatever he spent will be replenished in the name of Allah, the Almighty.”

He said “Before this place was constructed, after we slaughter the animals and left, pigs, dogs take over the place. We sometimes leave cow tails and feet and dogs will carry them away. For this reason, we went to the MP and asked for help to secure the place.

“Unfortunately, when we met him, he agreed to help us, even though he could not do all by himself he offered us support, and we really appreciate it,” Mr Alidu said.

The Sanitation Officer in charge of the Sandema Slaughter House, Mr Sulemana Wumpini said the sanitation situation of the slaughter house would improve with the construction of the facility, and thanked the MP for the gesture.