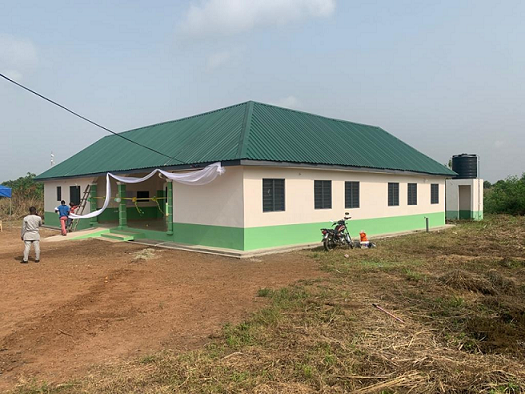 Mr Kwame Agbodza, Member of Parliament for Adaklu, on Thursday indicated his resolve to work hard with other stakeholders to develop the district to become a hub of health and education.

He said the development agenda for Adaklu was on course, adding “Adaklu will soon become the cynosure of all eyes”.

Mr. Agbodzah said this at the commissioning of a Health Centre for the people of Adaklu Wumenu in the District.

The project was funded by Mr. Agbodzah with the share of the National Health Insurance Levy and MP Common Funds with an initial contract sum of GHC266,850.00 but expected to double due to delays of implementation.

It had a laboratory, dispensary, out patients department, consulting rooms, delivery ward, and wash rooms among others.

Mr. Agbodzah informed the people that he would use every opportunity and resources available for the development of the area.

He said his checks revealed that some health workers in the area came to work late or absented themselves from work especially at weekends and urged them to refrain from such acts.

He reminded the people of the existence of COVID-19 and urged them to continue observing all the safety protocols associated with it.

Togbe Sekpe III, Chief of Adaklu Wumenu on behalf of his subjects expressed his gratitude to Mr. Agbodzah, who he described as a servant of the people for the provision of the health centre.

He appealed to the Adaklu District Assembly to help provide accommodation for the workers at the facility.

Health systems overburdened as India sees yet another virus record