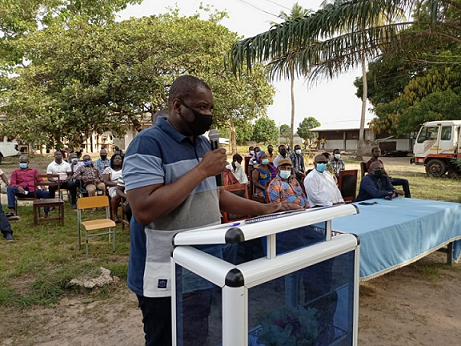 Mr Kwame Agbodzah, Member of Parliament for Adaklu on Thursday appealed to Ghanaians especially supporters of National Democratic Congress (NDC) to leave the 2020 election result behind and forge ahead in unity.

“We have more days ahead of us and we need peace in order to work to regain power,” he said.

Mr. Agbodzah made the appeal when he met the chiefs and people of Adaklu Kodzobi as part of his “thank you tour” of the constituency.

He said although they might not be happy about the outcome of the 2020 presidential election result and the court petition that followed, “let us unite and re-strategize for the days ahead of us.”

He was grateful for the people in the constituency for their support for the NDC which was translated into the number of votes they cast for ex-president John Mahama and himself in the 2020 elections.

Mr Agbodzah reiterated his resolve to work in tandem with other stakeholders like the traditional authorities to develop the area.

Togbe Dzegblade IV, chief of Adaklu Kodzobi said it was disheartening that the youth were clamouring for non-existent white-collar jobs whilst there were thousands of jobs for artisans.

“Artisans were making ends meet because there were a lot of jobs in that sector,” he said.

Togbe Dzagblade therefore urged the youth who could not go far in their education to learn a trade.
He praised Mr. Agbodzah for his untiring efforts to develop the area and called for support for him to do more.

IOC President looks ahead to “new era” of Olympic Games

UN experts call for peaceful campaigns ahead of Kenya polls