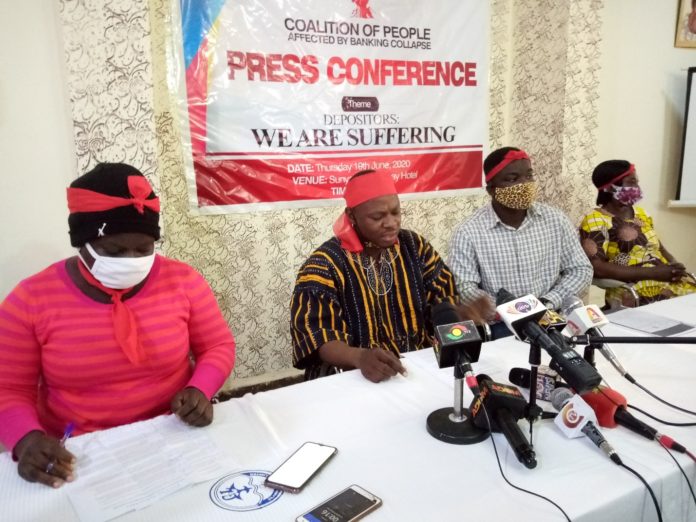 A group calling itself Coalition of Aggrieved Customers of ‘collapsed banks’ in the country has given the government a 14-day ultimatum to pay their cash deposits totaling millions of Ghana cedis or face their anger amidst the Corona Virus Disease (COVID-19).

The 2,221 aggrieved customers, spread across the Bono Region therefore threatened to embark on a protest march to besiege the Jubilee House, the seat of government if President Nana Addo Dankwa Akufo-Addo failed to address their grievances.

According to the group, comprising customers of the defunct GN Bank and UT Bank, as well as the DKM and God is Love Micro-finance, whose cash deposits were locked-up following the collapse of the financial institutions, President Akufo-Addo had failed to refund their cash deposits.

Last year, the Bank of Ghana (BOG) revoked the licenses of some savings and loans companies in the country.

The revocation of the licenses of the financial institutions, according to the central bank were necessary because they were insolvent even after a reasonable period within which the BOG had engaged with them in the hope that they would be recapitalized by their shareholders to return them to solvency.

But, at a news conference held at Abesim, near Sunyani, some members of the coalition who wore red armbands and headgears to portray their anger, explained that the life time savings of many of them were locked up at the defunct banks, thereby collapsing their businesses and worsening their socio-economic livelihoods.

“Many of us who entrusted our money and lifetime savings in these banks and financial institutions held on to Government’s promise that our monies would be safe”, Mr. Nicholas Saddari, the convener of the group, said.

“Today government is saying they can’t pay us, so they have issued a five-year bond for our locked-up deposits, that is zero or no interest paid on our deposits and investments after we have to wait for the 5 years to receive our money”.

“Then after many of us depositors agitated by saying we cannot wait for five years then government tells us to take the five bonds to Consolidated Bank of Ghana which will discount the bonds by 50 percent of the face value amount of the bond and pay that to us whilst we forfeit or forgo the remaining 50 percent the bond value which CBG will keep”.

Ghana Chamber of Mines to sell 125,000 ounces of gold to central bank

GhIPSS, Verve partner up for Cards Adoption in Ghana

Bank Of Ghana Advises Exporters To Be Proactive