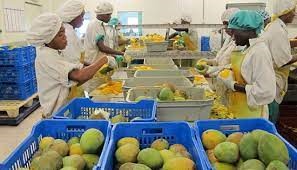 The Eastern, Volta and Oti branch of the Association of Ghana Industries (AGI) has commended the government for resuscitating distressed Astek fruits processing company limited.

Mr Dela Gadzanku, Chairman of the Eastern, Volta and Oti branch, who made the commendation in an interview with the Ghana News Agency (GNA), said the factory would help boost the economic development of the Eastern Region and the country at large.

He said the reopening of the factory came at a time, the country was preparing to take full advantage of the African Continental Free Trade Area (AFCFTA).

He lauded the Ghana Exim Bank for injecting capital into the business and expressed the hope that additional funds would be sourced for the next phase of the project.

He said though it was important for the government to facilitate the establishment of new industries, “it is also equally important to revamp distressed but viable industries across the country.”

The Nano Foods Limited, a pineapple juice processing factory at Nsawam in the Eastern Region, under the One-District, One-Factory (1D1F) initiative was on Thursday, May 20, 2021, commissioned by the Vice President, Dr. Mahamudu Bawumia.

The Nano Foods Limited, a defunct ASTEK Refresh Pineapple Juice Factory, was rejuvenated with US$1.6 million capital support, through the Ghana Export-Import Bank (EXIM Bank) in 2018.

The Company becomes the 77th factory in operation under the 1D1F programme, which has started commercial production in April, this year.

It is expected to produce up to 6,000 metric tonnes of pineapple fruits into juice per annum, which translates to eight million cans of finished packaged products.

The resuscitation of the ASTEK company formed part of the One-district, One-factory policy and it is geared towards creating jobs for the teeming youth at Nsawam and its environs.

ASTEK began fruit processing work in 1982, however, the company shut down its operations in 2009 as a result of financial challenges.