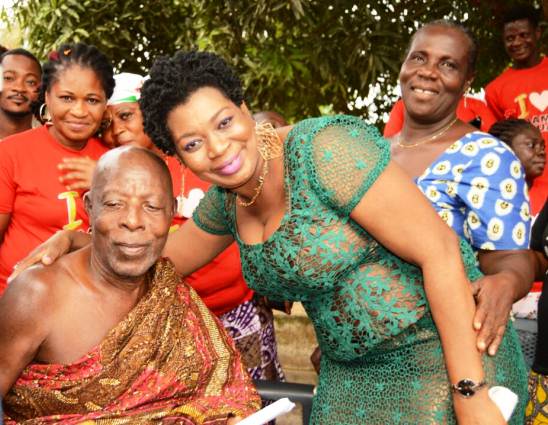 The Member of Parliament (MP) for Agona East, Hon. Queentar Pokuah Sawyerr has expressed great benevolence to Veteran Ghanaian comic actor, Asonaba Kwaku Darko popularly known as Super OD, who has been off the screens for years due to ill health.

The MP, who said she was touched by the deteriorating health status of the veteran actor, presented a number of items including an electronic wheelchair, Gh¢1000.00 cash as well as provisions like sugar, rice, milk, bread, crates of eggs, tins of milo, boxes of tea bags and others which could last him for months.

The MP, Queentar Pokuah Sawyerr who was touring her constituency paid a surprised visit to Supper OD and presented the items to him with smiles beaming all over the face of the actor.

The MP noted in her address that, she learnt of Super OD’s indisposition and decided to visit him to see how he was doing and also brought him greetings from former President John Dramani Mahama.

The MP later wheeled him around to show him the controls on the wheelchair, and promised to send Super OD an undisclosed amount of money in coming months to keep him going.

Supper OD expressed his appreciation and praised the MP for the timely visit.

Supper OD, who has been off our screens for some years, in a feeble voice, described how his knees have grown weak, making it difficult for him to walk.

The veteran actor who grew to fame with ‘Fatal Decision’ movie,  although was happy about the MP’s visit, sounded very troubled about his health which he said, is stopping him from doing what he does best, acting.

Super OD, who had a perfect acting career from the 1970s to the 90’s, was also very popular for his roles in local Ghanaian series, Akan Drama on Ghana Television.