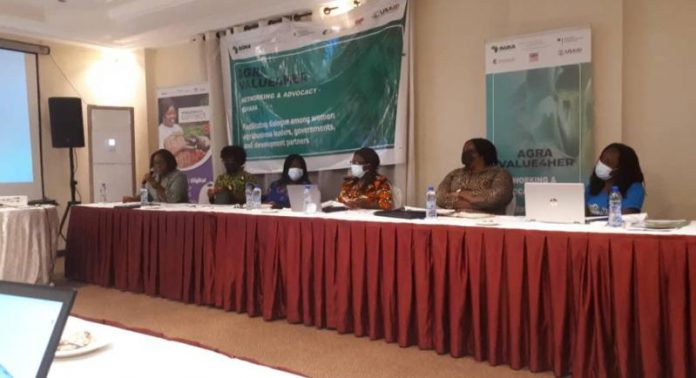 The Alliance for a Green Revolution in Africa (AGRA), has held an inter-country networking and advocacy meeting in Accra, to facilitate dialogue among women agribusiness leaders and industry actors to enhance their participation.

The discussions included how to bridge the gap between these entities, giving special attention to the VALUE4HER digital platform, which is AGRA’s continental Programme, to increase the performance of women in agri-enterprises.

This will be done through access to market and trade; finance and investments; knowledge and skill; networking and building their collective voices, and how it could be a connector or link between women and the market.

It also sought to amplify women business voices so that policies that enhanced their operations could be adhered to by government.

But we have a scope to grow this community to a much higher level, and in Ghana it was targeted at reaching out to over 500 women farmers, he said.

He stated that Africa was yet to take full advantage of the ‘green revolution’ as in Asia, saying currently, about 80 per cent of Africa’s agriculture was still in the hands of small-holder farmers, with women providing up to 50 per cent of the labour force for food production, and ensuring family nutrition and food security.

He said studies showed that gender-based inequalities in access to, and control of productive and financial resources inhibited female productivity and reduced food security and nutritional outcomes.

These farmers produced very little, were inefficient, non-profitable and often traded in drenched local markets where intense competition drove down their benefits, and had little to feed themselves, hence the need to improve their lots, he said.

Mr Boateng said low funding and access to land were major barriers towards expansions in the agricultural sector, as only four per cent of agricultural financing currently went to those in the value chain even though they were the ones feeding the entire country.

He said AGRA’s approach had been an inclusive one engaging all actors including the youth and women, and to shift from manpower to the mechanisation of the activities, while improving dysfunctional systems such as farmer access to extension services and lack of improved seeds.

AGRA in collaboration with its PIATA partners sought to grow the Programme and the digital asset that powered it, to be the go-to digital business resource for African women in agribusiness, to reach women entrepreneurs in all countries in Africa, by mobilising national, continental and global market actors, gender lens buyers and investors to do business with women companies, while technical assistance built their capacities to transform their incomes and livelihoods through these market opportunities, he explained.

Mr Boateng said the platform acted as a valuable database for a diverse group of sustainable agriculture-oriented partners seeking female business partners to fund, trade with, procure and source from.

He said, “for me government can take it to scale, private sector will sustain it,” adding that it was important to bring on board all stakeholders including women, and the youth, to transform Africa’s agriculture in order to benefit from the green revolution.

He pledged AGRA’s commitment to supporting the government with analytical data and information to drive its own agenda of planning and prioritisation of agriculture for sustained resources allocation.

“We need to help the government to create an enabling environment to bring in private sector investment which is the only way to sustain the gains made in agriculture”.

The hybrid session had a panel discussion, with women experts in Agribusiness, Agricultural Production, Post-harvest management, Finance, Commodity buyers, and Policy and Advocacy, sharing how their respective organisations had been contributing to addressing key barriers to women’s empowerment in agriculture.

The panelists shared their experiences and understanding of why women agri-preneurs faced perennial challenges in reaching production, Post-harvest management, marketing and financing and why it was difficult for private sector buyers and financiers to buy from women and finance their businesses.

Some of the challenges mentioned were women not having access to landed property, funding, improved seeds and market.