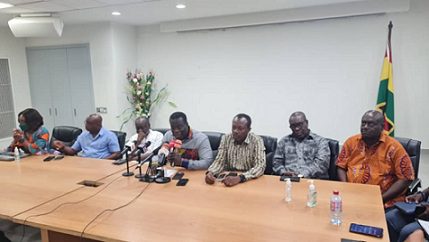 The Ministry of Employment and Labour Relations says the announcement of 30% base pay increase for the 2023 financial year was the result of tactical negotiations spanning several weeks.

Organized Labour had initially requested a 60% pay rise which government said it will not be able to afford.

After several weeks of negotiations and engagements under the auspices of the Ministry of Employment and Labour Relations led by minister Ignatius Baffour-Awuah and his deputy Bright Wireko – Brobby, government and organized labour finally reached an agreement.

There were ten different rounds of negotiations between both parties before an amicable agreement was agreed with the minister and his deputy who negotiated on behalf of the government.

“The leadership of Organized Labour would like to express our sincere thanks to the government for granting a 30% increase in base pay for 2023 for public sector workers,” Secretary General of the Trades Union Congress (TUC), Dr. Yaw Baah said on Thursday.

“We are happy that it has ended peacefully today. Labour Unions reduced the 60% base pay demand to 58%. The 30% even though it is not what we want, but it will create that opportunity for us to speak one language to work together,” he added.

Employment Minister, Ignatius Baffour-Awuah confirmed that “the base pay has been increased by 30% for the 2023 financial year. As I said, this brings to an end the 2022 COLA of 15% of base pay salary.” The base pay increment takes effect from January 1, 2023.

Deputy Minister of Employment and Labour Relations, Bright Wireko – Brobby who had sat through all the negotiations and even earlier engagements with Organized Labour said the government team had always believed constant engagements will yield a beneficial common ground for both sides.

Finance Minister Ken Ofori – Atta expressed concern the increment will put a strain on the country’s finances, but the government will find a way around it.

“As I mentioned this will take a toll on the budget, but we are confident that we would enhance productivity and the commitment that we both have given to each other to make sure that there is peace in this country as we look at pension and labour issues,” he said.

“We want to assure the government that we will collaborate with them and come up with ideas to improve the revenue generation. We know the next time we meet for base pay negotiations, it will be a better story,” he said.

Base pay increment revised from 60 to 65 percent

National Green Jobs Strategy to be implemented to improve economy